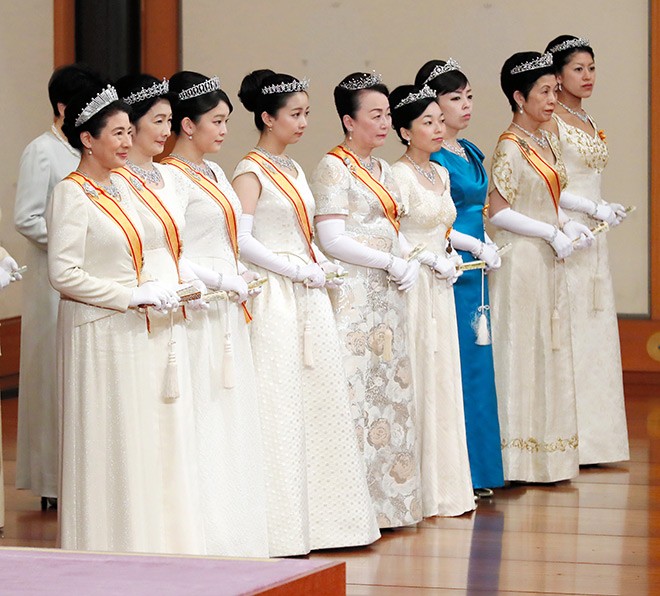 Empress Masako, far left, who was crown princess at the time, and other female members of the imperial family during a ceremony at the Imperial Palace to celebrate the New Year on Jan. 1, 2019 (Asahi Shimbun file photo)

Female members of the imperial family would still lose their royal status if they marry but get a new official title that lets them continue to perform their duties under plans to address the thinning of the imperial line.

The proposed change is part of a government move to secure enough family members who can carry out official duties, sources said.

The Imperial House Law stipulates that female members of the imperial family must relinquish their royal status upon marrying a commoner.

One proposal is for female members to be given the title “kojo” (literally, imperial woman), which would allow them to continue to perform their official duties even after marriage to help maintain the imperial family’s activities, sources said.

In 2012, the Democratic Party of Japan under Prime Minister Yoshihiko Noda considered a similar idea when it was looking at revisions to the Imperial House Law.

Around 2014, during the second administration of Prime Minister Shinzo Abe, the government also sought Cabinet approval for a similar idea, according to the sources.

The issue is back in circulation because legislation would not be needed to implement the idea of introducing the kojo title.

Some within the government say conservative groups that form Abe’s support base would probably find it palatable because it allows them to discuss the matter separately from the issue of ensuring stable imperial succession, another problem arising from the shrinking family.

They said conservatives who advocate maintaining the current male line of succession may accept the idea if women given the kojo title must still leave the imperial family.

The imperial family currently has 18 members, but many are elderly. There are only seven members under the age of 40 and six are female, leaving Prince Hisahito, the son of Crown Prince Fumihito and Crown Princess Kiko and second in line to the throne, as the only member in that age group who can continue carrying out official duties as an imperial family member after marriage.

The government is also considering points for discussion on establishing houses headed by female members of the imperial family by retaining their royal status after marriage and allowing male descendants of former members of the family to enter the imperial household through adoption.