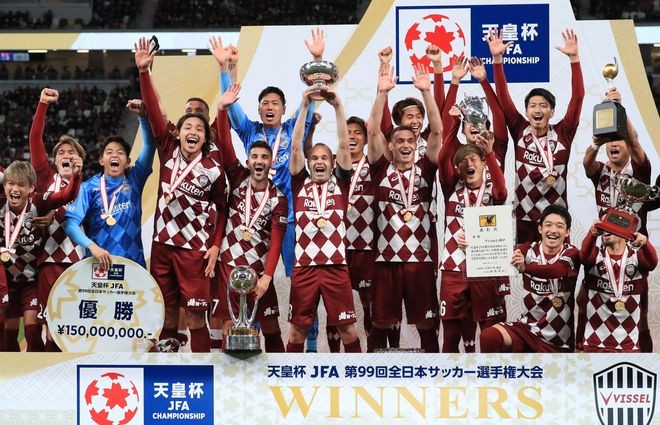 HONG KONG--Andres Iniesta was on target as Vissel Kobe became the first team to book their place in the knockout stage of the eastern zone of the Asian Champions League in Doha on Wednesday with a 3-1 win over two-time champions Guangzhou Evergrande.

The Spanish World Cup winner put the seal on the win six minutes from time after Kyogo Furuhashi and Douglas had both found the net for last year’s Emperor’s Cup winners.

With only three teams in the group following the withdrawal of Malaysian side Johor Darul Ta’zim, Kobe’s win was enough to ensure a top two finish in Group G and take the Atsuhiro Miura-coached side into the last 16 in their debut appearance.

"I think they played a much better game than us in all aspects, so unfortunately we didn’t win this game," said Guangzhou’s Anderson Talisca.

Furuhashi had given Kobe the lead on the stroke of halftime when he slotted his effort home following Iniesta’s cut back from the bye-line.

However, the Japanese winger put the ball in his own net 10 minutes after the restart when he was unable to stop Tatsushi Yamakawa’s header from crossing the goal line, restoring parity for Guangzhou.

Substitute Douglas put Kobe back in front when he raced in behind the Guangzhou defense before thumping the ball past Liu Dianzuo and Iniesta sealed the win when he bent his shot into the top corner after seeing his initial effort blocked.

Victory moved Kobe on to six points while Guangzhou remain on one point, level with Suwon Bluewings after two games.

In Group H, Jeonbuk Motors kept their hopes alive at the expense of Sydney FC as the South Korean’s claimed a 1-0 win over the Australian champions.

Na Sung-eun scored one minute before the end of the first half to move his side within five points of group leaders Yokohama F Marinos.

Marinos beat Shanghai SIPG 1-0 thanks to a last-minute goal from Jun Amano after goalkeeper Powell Obinna Obi had denied Oscar from the penalty spot nine minutes earlier as the J-League champions secured their third straight win.

Qatar is hosting 15 teams in the eastern half of the Asian Champions League, with the group phase of the competition to continue until Dec. 4.

The knockout phase starts two days later with the final--against Iranian side Persepolis--due to be played on December 19, also in Doha.