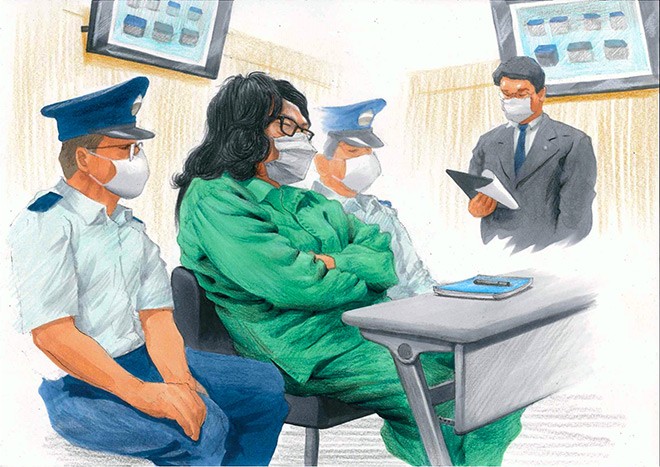 A drawing of Takahiro Shiraishi during the first hearing of his murder trial at the Tokyo District Court’s Tachikawa branch on Sept. 30 (Image drawn by Kageyosi Koyanagi)

Prosecutors on Nov. 26 requested the death penalty for a suspected serial killer who admitted to killing nine people, sexually assaulting them and dismembering their bodies.

A ruling is expected on Dec. 15 at the Tachikawa branch of the Tokyo District Court.

Takahiro Shiraishi, 30, is accused of multiple counts of murder, forcible sexual intercourse and robbery in connection with the dismembered bodies of eight women and one man found in his apartment in Zama, Kanagawa Prefecture, in 2017.

His defense team has called for leniency, saying the victims, between the ages of 15 and 26, were suicidal and consented to being killed.

Prosecutors said he killed the victims for his own purposes, to obtain sex and money.

Shiraishi has agreed with the prosecutors’ argument.

Prosecutors also said Shiraishi was mentally fit enough to bear responsibility for his actions. But the defense said the accused cannot be held responsible given his psychological state.

Shiraishi lured the victims to his apartment from Tokyo and four prefectures between August and October 2017 by saying on social media that he would help them commit suicide, according to the prosecutors’ statements and other sources.

He is accused of strangling each with a rope, robbing them of up to tens of thousands of yen each and raping the female victims. He also allegedly dismembered and abandoned their bodies.