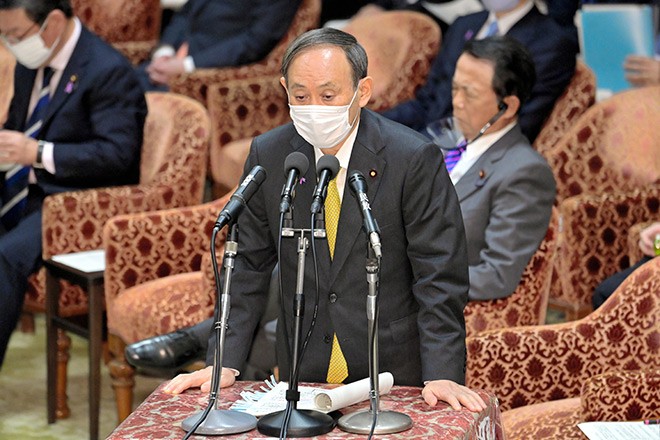 Six hours of Diet deliberations on Nov. 25 produced little in the way of answers regarding the reignited controversy related to cherry blossom parties hosted by Shinzo Abe when he was prime minister.

Prime Minister Yoshihide Suga refrained from responding or said he was in no position to answer questions 25 times in the Budget Committees of the two Diet chambers.

The questioning by opposition lawmakers concerned recent revelations that Tokyo prosecutors were investigating Abe’s support group about unreported payments made for annual banquets held for his supporters on the eve of the tax-funded cherry blossom viewing parties host by the prime minister in the capital.

The Budget Committee sessions were delayed by about 15 minutes because opposition lawmakers insisted that Abe be summoned to take questions. The ruling coalition refused those demands.

“This is an issue about whether the prime minister lied in the Diet,” Yukio Edano, head of the main opposition Constitutional Democratic Party of Japan (CDP), said in the Lower House Budget Committee session. “That would be similar to ridiculing Diet deliberations.”

The payments by the support group covered the difference between the total costs of the hotel banquets and the fees charged to the guests, who were mainly from Abe’s constituency in Yamaguchi Prefecture, investigative sources said.

The group, however, did not report those expenses, a possible violation of the Political Fund Control Law.

As prime minister, Abe said in the Diet and elsewhere that no payments were made to the hotels that held the banquets.

Edano told Suga that he should ask Abe to provide a clear explanation about the matter.

While Suga said his predecessor had repeatedly responded to such questions in Diet, he added it was up to the Diet to decide if Abe should be asked to appear again to give an explanation.

Edano then turned the focus of attention on Suga himself and asked about his responsibility for defending his predecessor as chief Cabinet secretary.

“I responded after checking with Abe about what he said in response to Diet questioning,” Suga said.

Since Suga had said that he would follow the course set by Abe, some expected he might fulfill his responsibility to answer remaining questions about the cherry blossom viewing events as well as scandals related to two educational institutions, Moritomo Gakuen and Kake Educational Institution.

But Suga has continuously distanced himself from those scandals.

On Nov. 25, he said he first learned about the latest developments about the banquets through media reports and added that he has not received any explanation from Abe or his associates.

As chief Cabinet secretary, Suga often defended Abe in the Diet against suspicions raised about the dinner parties and the participants’ fees, which have been described as “too low.”

For example, in February, when Abe was asked to release invoices from a hotel where a banquet was held, he said no such document had been received.

Suga later said that Abe’s response was made after confirming the matter with hotel officials.

Suga also said at that time that responsibility for Diet responses had to be taken since the minutes of deliberations were kept for all responses made.

The hotels have since issued receipts that show Abe’s support group did make the payments for the banquets, the sources said.

In the Nov. 25 Upper House Budget Committee, the CDP’s Tetsuro Fukuyama asked Suga if his past responses meant the hotel was lying.

“If the facts turn out to be different, then I would of course have to take responsibility for my responses,” Suga said. “I will handle the matter in an appropriate way.”

When Fukuyama asked Suga to reconfirm the matter with his predecessor, aides to Suga handed him a memo, and the prime minister then declined to respond, citing the ongoing investigation.

Meanwhile, Abe on Nov. 25 attended a meeting of LDP lawmakers and boasted about the success of his economic policies without mentioning the latest suspicions about the cherry blossom viewing event.