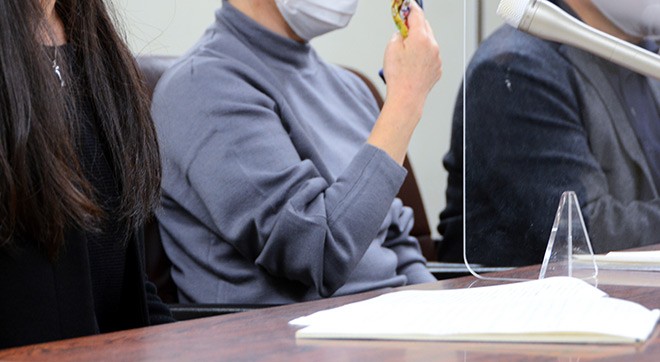 A bereaved family member of the student speaks at a news conference in Tokyo on Nov. 25 after the Tokyo High Court ruling. (Eri Niiya)

The Tokyo High Court dismissed an appeal on Nov. 25 over a lower court ruling that said a university was not at fault in the death of a gay student who was outed against his consent.

The 25-year-old graduate student, who died by falling from a school building, was studying at Hitotsubashi University’s law school. His parents had filed a lawsuit seeking about 86 million yen ($824,654) in compensation from the university.

But while the Tokyo District Court did not offer its views on the outing, the higher court had stern words.

The Tokyo High Court called it a “serious invasion of personal and privacy rights” and said it constitutes “unforgivable behavior.”

His parents praised that comment and clarified that they would not appeal the case to the Supreme Court.

The student was outed in a group chat.

After he told a classmate in 2015 that he had romantic feelings toward him, the friend posted a message in a group chat among nine friends on the Line messaging app that outed him.

“I can’t hide the fact that you are gay,” it said.

The student consulted with the university about it, but to no avail.

“Teachers and school staff should have shuffled his classes immediately after they learned of the outing,” his parents said.

But the higher court said he “didn’t make his final decision based on his desire to have classes reorganized.”

“It is difficult to admit that there were imminent circumstances.”

A teacher had suggested to the student that shuffling his classes might not be in his best interest.

“Please consider the risk that more people could learn about the outing if classes are suddenly shuffled,” the teacher told him.

The higher court said that advice was “appropriate,” and concluded that the university’s response did not breach the law.

At a news conference in Tokyo, the student's bereaved family members said they hope Hitotsubashi University will become a place where everyone can study with peace of mind.

“No one should lose their life like my son,” his mother said. “I hope that sexual minorities can have more chances to consult about their worries and live without becoming victims of prejudice.

“We once again offer our sincere prayers for the repose of his soul,” a university official said. “We will continue to try to promote and protect minority rights in our school.”