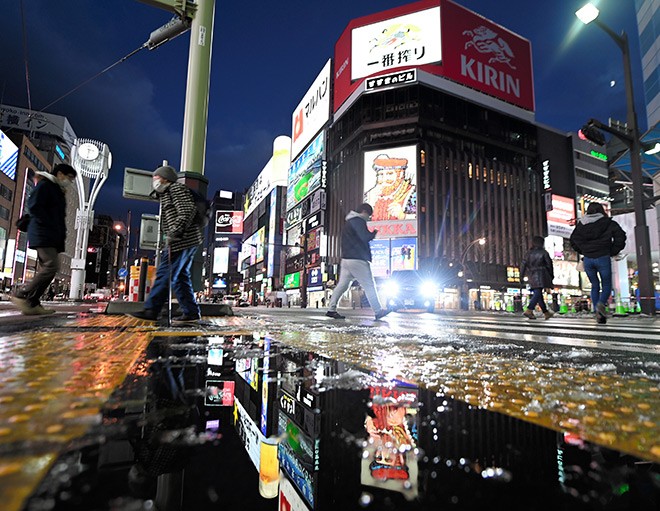 Few people cross an intersection in the Susukino entertainment district of Sapporo on Nov. 23 following a surge in novel coronavirus infections. (Kengo Hiyoshi)

Health experts are urging the government to consider suspending trips under the Go To Travel campaign from hotspot areas where COVID-19 cases are surging.

The government’s expert panel on the coronavirus pandemic issued the call on Nov. 25, asking that it freeze trip bookings from areas that have reached around the second-highest level of novel coronavirus infections, known as stage 3.

The government recently decided to temporarily halt new reservations under the tourism promotion campaign for destinations where infections are spreading. But that did not cover trips out of those areas.

The panel’s latest recommendations cautioned that people need to avoid travel to and from areas at the “equivalent” of the stage 3 level as much as possible unless necessary measures are taken to prevent infections.

Under the panel’s four-stage classification system, areas in stage 3 have a sharp increase in new infections.

Shigeru Omi, who heads the panel, said at a news conference that Sapporo, Tokyo’s 23 wards, Nagoya and Osaka are now all at the equivalent of stage 3.

The panel urged stage 3 regions to implement stronger measures to contain the spread of the virus over the next three weeks, and expressed alarm over “a lack of necessary measures in some areas” that are at about that level.

Prime Minister Yoshihide Suga has rejected suspending the Go To Travel campaign outright or launching a further review of the program.

Suga said at a Lower House Budget Committee meeting on Nov. 25 that more than 40 million people have traveled under the campaign, but only 180 of them have been confirmed infected with the virus so far.

“The campaign is not directly linked to the recent surge in infections,” he said, noting that the panel found no solid evidence at this point to indicate the program was a key factor behind the recent spike.

The central government decided on Nov. 24 to temporarily drop Sapporo and Osaka, where COVID-19 cases are rising, from the campaign.

Suga called it a preventative measure to tamp down on the virus from further spreading in the cities and protect the local health care systems.