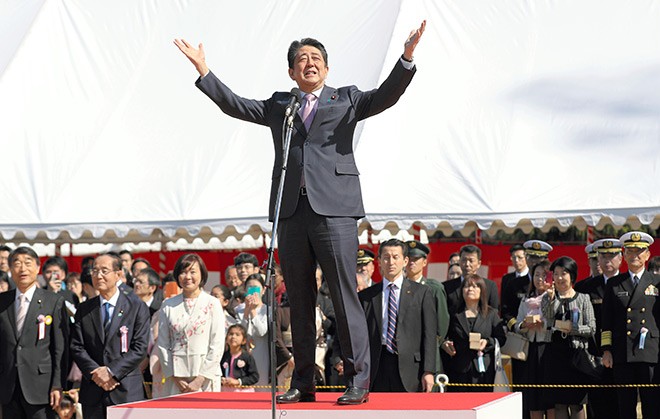 Prosecutors are focusing on the unreported aspect of expenses for banquets hosted by former Prime Minister Shinzo Abe’s support group instead of the difficult task of proving these payments were favors to voters, sources said.

A criminal complaint filed against Abe and two of his senior aides in May over the payments cited possible violations of the Political Fund Control Law and the Public Offices Election Law.

Abe’s fund managing organization did not list the payments it made to Tokyo hotels where the banquets were held in its income and expenditure reports on political funds. That failure could violate the Political Fund Control Law.

If the payments, which covered the difference between participant fees and the total costs of the banquets, were intended as endowments to voters, such an action would breach the Public Offices Election Law.

To pursue this charge, prosecutors would need to present evidence that both the participants and their host shared an awareness that the action was intended to provide benefits to voters.

Several banquet participants told prosecutors during voluntary questioning that they did not feel the host was providing favors with a dinner that was worth more than the fees they paid, according to the sources.

“The food served was not enough, and I did not feel I was given any benefits,” one of the guests was quoted as saying.

Officials with Abe’s office also told investigators that they did not think that they provided endowments for the participants for an election by covering the balance for the dinner parties, according to the sources.

But the officials acknowledged that their decision not to document the costs involved in the dinner receptions in the fund managing organization’s reports could have posed legal problems.

“We should have recorded them in the reports,” one of the officials said, the sources added.

Participants were charged 5,000 yen each for the banquets held between 2015 and 2019 by the support group, which was headed by Abe’s chief government-paid aide. The dinner parties were held at either Hotel New Otani or ANA InterContinental Tokyo.

The guests were from Abe’s constituency in Yamaguchi Prefecture, and most of them were also invited to tax-funded cherry blossom viewing parties in the capital hosted by the prime minister the day after the dinner parties.

Abe’s side had paid about 9.16 million yen ($88,076) to cover the difference between participant fees and the 23.43 million yen in overall costs for the five banquets.

Abe had repeatedly said in the Diet that his side did not pay any money to the hotels regarding the banquets, and that receipts issued by the hotels did not exist.

Regarding the receipts, which do exist, the opposition bloc has attacked Prime Minister Yoshihide Suga for giving what turned out to be false explanation in the Diet when he was chief Cabinet secretary.

“If the facts turn out to be different, then I would of course have to take responsibility for my responses,” Suga said in answering a question from Tetsuro Fukuyama of the main opposition Constitutional Democratic Party of Japan at the Upper House Budget Committee meeting on Nov. 25. “I will handle the matter in an appropriate way.”

But when pressed, Suga declined to directly inquire Abe to set the record straight.