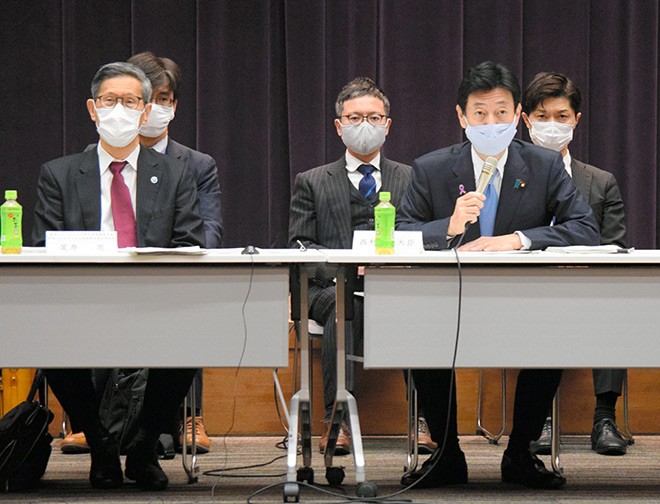 Yasutoshi Nishimura, right, the state minister in charge of economic revitalization, and Shigeru Omi, left, who heads the central government panel of experts dealing with the novel coronavirus pandemic, appear at a news conference in Tokyo on Nov. 25. (Tomohiro Yamamoto)

Tempers are boiling over and patience is in short supply as health care experts stew over the inaction of national and local officials as the novel coronavirus pandemic grows from bad to worse.

“We are at a critical time,” Shigeru Omi, who heads the central government panel of experts dealing with the novel coronavirus pandemic, warned at a news conference in Tokyo on Nov. 25.

The panel members, growing increasingly frustrated with the governments’ limited or non-action to contain the pandemic’s third wave, held another meeting that day, less than a week after their previous one.

With a new proposal in hand, the panel members once again pressed the leaders to take immediate action to prevent hospitals from being overwhelmed by infections.

“The speed of infections spreading is so rapid in some areas and infection clusters are occurring at a high level on a widespread scale,” the panel said in the latest proposal. “The health care delivery system in these areas has already been under grim circumstances.

“The way things now stand, lives that can be saved under the normal health care system will not be saved,” said the proposal, which is filled with a profound sense of crisis.

The longer it takes for the central and local governments to step in and do something to change the tide, “the more the effects on socio-economic activities will be brutal,” the panel concluded.

The health experts' frustration stems from the dire reality that at least six prefectures have reached more than half the conditions set by the panel to indicate the level of risk of infection.

As of Nov. 23, Aichi and Osaka prefectures have met all six criteria of stage 3, where the number of new infection cases surges to the point where the government must impose stricter restrictions on economic activities.

Tokyo, Hyogo and Okinawa prefectures have hit five of the six criteria, while Hokkaido has met four, according to the data released by Yasutoshi Nishimura, the state minister in charge of economic revitalization, who is also the central government’s point person in dealing with the pandemic, at the news conference.

Some of the governors have taken action, asking residents and businesses to cooperate to prevent the regional health care system from collapsing.

The Tokyo and Osaka governors have asked restaurants and bars in certain areas to close earlier.

Osaka and Sapporo, two cities popular with tourists, have been dropped from Go To Travel after the panel on Nov. 20 called for a revision of the central government’s discount campaign to boost consumer spending and support the tourism sector, which has been battered by the pandemic.

Both governors on Nov. 24 asked the central government for their prefectural capitals to be excluded from the program to deal with the recent virus surge.

However, none of the six governors has officially declared a stage 3.

Nishimura at the news conference shared the panel’s strong concerns and said, “This is a very important phase in an effort to stop the upsurge of virus infections.”

But asked if the central government would pressure these governors to declare a stage 3, Nishimura avoided responding directly, saying, “Governors know best.”

“We have continued to communicate with them closely,” he added.

CAN'T HAVE IT BOTH WAYS

To some extent, the current situation has been inevitable.

After the pandemic’s first wave that hit Japan in spring had ended, the central government has shifted gears to balance anti-virus measures with recovery in economic activities.

Easing restrictions on the number of attendees at public events was one example, as well as launching the Go To Travel and Eat campaigns, which are intended to stimulate consumer activity.

But these policies have come with high risks of spreading the virus through more human contacts.

Having it both ways requires a difficult juggling act.

Therefore, the panel in August proposed establishing a system, in which the level of pandemic situation is divided into four stages. Depending on the stage, governments put the brakes on or ease socio-economic activities such as travel and dining.

Stage 1 is where new infection cases are sporadically reported. When the number of new cases is on a gradual rise, the panel declares the situation a stage 2.

At stage 3, there is a major surge in the number of new infection cases. Stage 4 is when the number sees an explosive increase.

At stage 3, the central and local governments are supposed to impose tighter restrictions on economic activities.

At stage 4, governments will consider issuing a state of emergency.

But the decision to declare a stage is left to the governors.

At the National Governors’ Association’s online meeting on Nov. 23, many governors expressed difficulties in deciding when to drop certain areas from the Go To Travel campaign.

The association urged the central government to set clear standards and guidelines.

Tokyo Governor Yuriko Koike on Nov. 24 said of excluding the capital from the Go To Travel program, “It is the central government’s responsibility to decide.”

Such a political tug of war is nothing more than a waste of time for the overstretched medical workers on the front lines.

“All over the country, the health care delivery system is on the brink of collapse,” Toshio Nakagawa, who heads the Japan Medical Association, said on Nov. 25.

“We could not anticipate this two weeks ago,” Nakagawa said, emphasizing the seriousness of the current situation.

If this trend continues, experts are afraid that the tally of new cases per week will hit 50,000 in three weeks.

Nakagawa pointed out that the health care institutions that have taken in COVID-19 patients have been plagued by shortages of doctors and nurses, because many have been infected with the virus themselves or exposed to a virus carrier and forced to quarantine at home.

To secure beds for COVID-19 patients, some hospitals have had to refuse to accept patients suffering from strokes and myocardial infarctions.

Responding to such a crisis, the panel on Nov. 25 urged the six prefectural governments to make a quick judgment and immediately implement measures required for stage 3.

If appropriate health protocols and necessary anti-virus measures are not implemented, the governors should urge residents not to travel to and from areas that are not at stage 3 for three weeks, the panel said.