Study: Opening windows not best defense against droplets in car

The supercomputer Fugaku runs the numbers on the effectiveness of ventilating cars by opening the windows compared to using air conditioning. (Provided by Riken research institute) 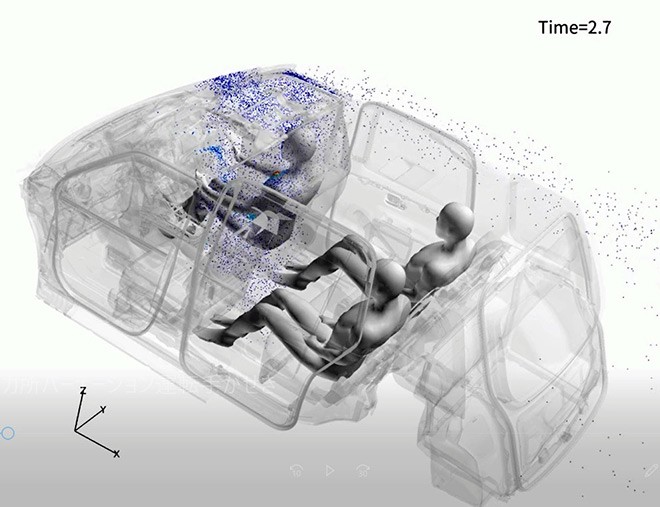 The supercomputer Fugaku runs a simulation in which a driver coughs in a car with partitions separating them from the passengers, and where the driver’s side and left backseat windows are open. The droplets, represented as blue dots, effectively leave the car. (Provided by the Riken research institute in cooperation with Toyota Motor Corp. and the transport ministry)

Air conditioning is more effective at fully ventilating a car than cracking open the windows, according to new research done using the world’s fastest supercomputer.

A team led by the government-affiliated research institute Riken announced the results on Nov. 26 from its study into how droplets spread throughout the inside of taxis, part of its research into preventative measures against the novel coronavirus.

It crunched the numbers on the Fugaku supercomputer.

As it turns out, opening the taxi cab’s windows to boost air ventilation actually has a limited effect as a protective measure, the researchers said.

They found it is more important to take in outside air by running the air conditioner on fresh-air mode and to continue wearing face masks during the ride.

“The ventilation ability of air conditioners is very high and increasing the air conditioner’s airflow volume is more effective than opening the windows,” said Makoto Tsubokura, Riken’s research team leader and a computational science professor at Kobe University. “In the cases where a passenger in a backseat coughs, wearing a mask proved very effective as the first preventative measure.”

The team ran simulations on the inside of a taxi with a driver and two passengers traveling at about 40 kph in a city.

It examined two scenarios: one where the taxi has its windows closed but is running an air conditioner that takes in outside air, and another where windows diagonally across from each other are open.

In the open-window scenario, the window to the right of the driver, along with the window on the left side of the back seat, are cracked open by five centimeters.

With the car’s air conditioner set to half its maximum airflow volume with the windows closed, it took 85 seconds for the taxi to be fully ventilated.

Meanwhile, opening the windows beat it by just a little. It takes 68 seconds for the air to circulate out of the car, more effective by 25 percent.

If the taxi slows to 20 kph with the windows open, the results were not too promising: 82 seconds.

By contrast, the air ventilates within 45 seconds after closing the windows and putting the air conditioner on its maximum airflow setting.

If a driver not wearing a facial mask coughs, small droplets will spread throughout the inside of the car in the direction of the air conditioner’s airflow, according to the supercomputer’s calculation.

If the windows are opened diagonally, a quarter of those droplets go out the windows within 20 seconds, but a lot of the droplets still manage to reach the back seat. However, if there are partitions set up between the driver and passenger seats, the droplets will effectively blow out of the car’s open windows.

But then if a passenger without a face mask coughs, opening the windows proves ineffective. In this case, the partitions did little to completely prevent small airborne droplets from spreading.

The team also studied how droplets spread through karaoke parlors and airplanes.

In a scenario where nine people gather in a small karaoke room measuring 21 cubic meters and one of them sings, their droplets spread over the entire room within about 30 seconds. However, there are differences in the results depending on where they position themselves to sing.

The air circulation systems of airplanes will, meanwhile, purify the cabin’s air within about three minutes, according to the supercomputer’s results.