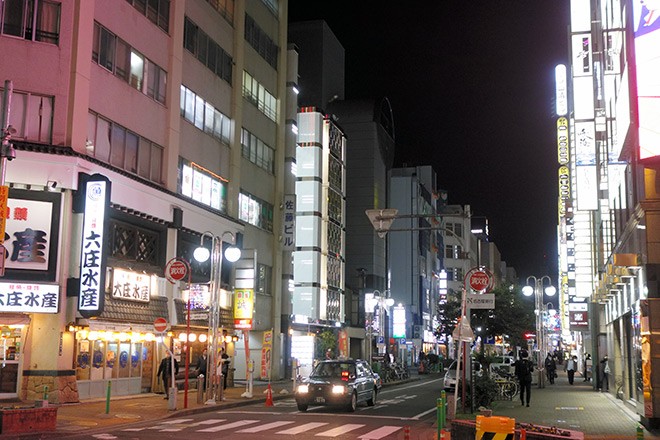 A street is relatively empty in Nagoya’s normally bustling Kinsan entertainment district on Nov. 26. Local restaurants will be asked to suspend or shorten their operations from Nov. 29 to contain the novel coronavirus. (Takuya Kado)

Three governors around Japan followed Tokyo’s example and are asking alcohol-serving businesses to suspend or shorten operations to prevent local health care systems from collapsing under the weight of surging novel coronavirus infections.

Following a spike in COVID-19 cases, Aichi Governor Hideaki Omura on Nov. 26 said he will ask some restaurants in Nagoya’s Kinsan and Sakae entertainment districts to cut their operating hours or close temporarily from Nov. 29 through Dec. 18.

“We want to contain the spread of the virus by preventing cluster infections from occurring,” Omura said, calling for cooperation.

The request is based on the special measures law to deal with the pandemic and mainly targets snack bars and other establishments where staff members entertain customers, as well as karaoke parlors that serve alcohol.

The prefectural government will ask such businesses to close between 9 p.m. and 5 a.m. if they comply with anti-infection guidelines. Those that do not follow the guidelines will be urged to suspend their operations.

Izakaya pubs, “yakiniku” barbecue restaurants and other establishments not covered in the request will also be asked to close by 9 p.m.

About 2,500 restaurants will be subject to the request, according to the prefectural government.

The Osaka prefectural government will also ask restaurants that sell alcohol in Kita and Chuo wards in central Osaka to close between 9 p.m. and 5 a.m. from Nov. 27 through Dec. 11.

“It’ an agonizing decision, but we must prevent a further spread of the virus now that the local health care system is extremely strained,” Osaka Governor Hirofumi Yoshimura said on Nov. 26.

Kita and Chuo wards are home to the popular Kita and Minami entertainment districts. Around 25,000 restaurants are located within or near those areas, accounting for nearly half of the roughly 54,000 establishments in the city.

The governor’s request is mainly targeted at those that serve alcohol.

The central government as well as the Osaka prefectural and city governments will provide 500,000 yen in financial support to each business that complies with the request.

A Hokkaido government task force dealing with the health crisis on Nov. 26 decided to extend by two weeks the current three-week period that started on Nov. 7 for taking intensive measures to prevent infections.

The Hokkaido government will ask entertainment-style businesses in Sapporo, the capital of the northernmost main island, to close temporarily from Nov. 28 through Dec. 11 to stem the spread of the virus.

“The local health care system is under increasing strain and will likely become unable to provide proper medical care, particularly in Sapporo, if the situation continues,” Hokkaido Governor Naomichi Suzuki said at the task force meeting.

“We’ll focus on taking thorough measures over the next two weeks.”

The measures will include requests from the Hokkaido government for host and hostess clubs and similar establishments in Sapporo to suspend their operations.

Tokyo Governor Yuriko Koike on Nov. 25 asked eateries and karaoke parlors that serve alcohol in the capital to close by 10 p.m. until Dec. 17.