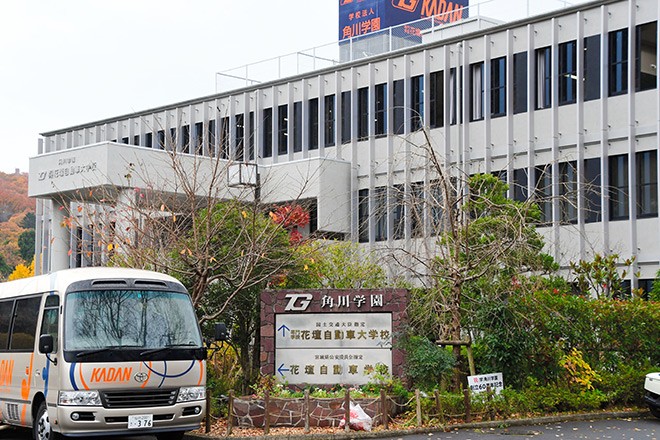 The Kadan Automotive Technical College was the site of a COVID-19 cluster that included 109 foreign students. (Chihito Shin)

COVID-19 cluster cases are spreading in communities with sizable foreign populations, triggering alarm among Japanese residents and an inevitable backlash in the form of discriminatory postings on social networking sites.

At the same time, local authorities are struggling to provide emergency information about the novel coronavirus pandemic in other languages.

Between Oct. 20 and Nov. 10, 114 people affiliated with Kadan Automotive Technical College in Sendai, in northeastern Japan, were confirmed to have COVID-19.

Of that figure, 109 were students from overseas, making it the largest group cluster in the Tohoku region.

Sixty-four of the students lived in a dorm, a collective living arrangement deemed responsible for the outbreak.

Local government officials are facing difficulties providing relevant information about the health crisis, such as how to prevent a spread of infection or where to call for consultation in languages other than Japanese.

To date, that information is available in such languages as English and Chinese, in addition to Japanese. A hotline  consultation center operated in conjunction with the Miyagi prefectural government now has operators able to converse in 12 languages.

But there still remain many instances of individuals not calling even if they develop a fever or other symptoms.

“Foreign residents tend to stay inside their own communities, which serves as a barrier when we want them to consult with Japanese administrative agencies,” said an official with the Sendai city government.

Officials in Aichi Prefecture are confronting a similar problem. With 276,282 foreign residents as of June 30, Aichi has the second largest foreign population in Japan.

But those working at local public health offices are having a hard time tracing the infection routes of those with COVID-19. If the person does not speak reasonable Japanese, a family member or friend must serve as interpreter to explain the route of infection.

“First of all, it is difficult to get them to understand the Japanese term for someone with whom they were in close contact,” noted a woman in her 40s who works at a public health office. “There is also the issue of whether the points of caution that we try to pass on have been conveyed properly.”

An official in Toyohashi, Aichi Prefecture, expressed concern that some patients did not want their family, friends or employer learning that they had COVID-19 and kept that information from prefectural officials.

Inevitably, the rumor mill has been working overtime.

Eastern Gunma Prefecture that includes the town of Oizumi where about 20 percent of the population is made up of non-Japanese, including a large Brazilian community, has witnessed a spread of cases since September.

The development triggered posts on social media claiming an infection cluster occurred at a school for Brazilians. Another post said, “The town government is covering up that fact.”

During some weeks when infections surged in eastern Gunma, between 70 to 80 percent of the cases involved foreign residents.

On Nov. 5, a network of individuals comprised of doctors, lawyers and others, was set up to provide support for those targeted by the rumors.

“Some of the social media posts said things like ‘It is better not to play with the children of foreigners,’ which can foment discrimination,” said Oizumi Mayor Toshiaki Murayama. “A need has arisen for a multilevel support program that involves psychological care and legal advice.”

Another infection cluster in Gunma Prefecture occurred in mid-October at a technical school in Maebashi involving 53 foreign students.

A beauty salon in the city posted a notice on its entrance naming the school and saying students were barred from entering.

“I heard that there were many students who were not obeying instructions to refrain from going out,” the owner said.

While the owner asserted there was no intent to discriminate, the school principal said, “It was a very unfortunate comment because of its discriminatory nature.”

Gunma Governor Ichita Yamamoto has repeatedly asked local residents at news conferences to not defame or discriminate against foreign nationals since they also live and work in the prefecture.

In the interim, the Cabinet Secretariat in Tokyo has set up a website on dealing with the novel coronavirus pandemic that provides information in 17 languages.

It is also trying to provide further support by providing medical information in cooperation with local public health offices. This is done by liaising with prefectural government coordination offices set up for foreign residents.

Cases of group clusters among foreign residents have been traced to large parties linked to celebrations in their home nation as well as at restaurants, workplaces and dorms.

At a Nov. 12 meeting of the government’s panel of experts dealing with the health crisis, officials tried to address situations in which some foreign residents refrain from wearing face masks outside.

The government is seeking to use all channels available, such as social media, embassies, consulates, churches and temples, to provide more detailed information. It has also provided support to allow medical institutions to use telephone interpretation services.