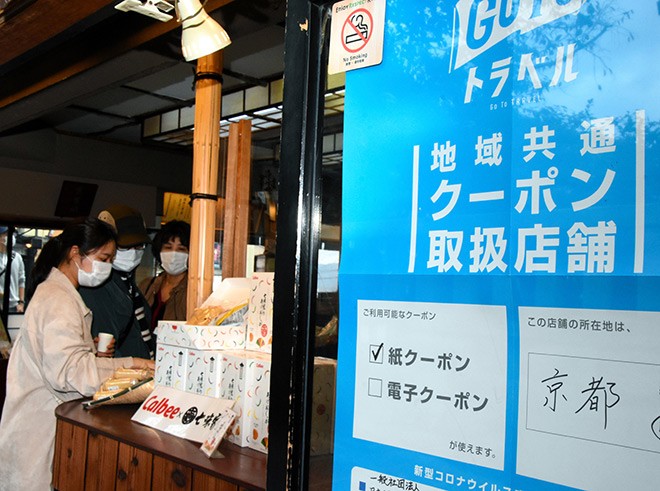 A sign near Kyoto’s Kiyomizudera temple states that tourists can only use paper coupons issued under the Go To Travel campaign at this souvenir shop on Oct. 22. (Asahi Shimbun file photo)

An unemployed man was arrested on Nov. 28 on suspicion of fraudulently receiving 540,000 yen ($5,100) in coupons from the central government's Go To Travel campaign after booking stays at luxury Tokyo hotels, investigative sources said.

Tokyo’s Metropolitan Police Department arrested Takuya Aida, 30, who resides in Fujisawa, Kanagawa Prefecture. He became the nation's first suspect in a litany of scams reported in connection with the program, aimed at boosting the tourism industry during the novel coronavirus pandemic.

Aida received the digital coupons worth 540,000 yen after he booked a weeklong stay at five high-end Tokyo hotels each through an online hotel reservation site in early October, according to the sources.

When he made the reservations, he applied for the Go To Travel campaign, which subsidizes part of the hotel charges, and obtained the vouchers that can be used for shopping in Tokyo.

Aida used the coupons to purchase a smartphone or game apps, according to the sources.

Aida’s arrest follows a flurry of suspected fraudulent incidents across the nation in which perpetrators booked hotels under false names and addresses under Go To Travel to receive digital vouchers. They later canceled their reservations without notifying the hotels.

They apparently exploited the loophole in which coupons, issued digitally, will be made available to hotel guests from the afternoon of the first day of their stay even if they have not physically checked in yet or paid for their stay.

Police began investigating Aida after complaints were filed by the central government’s Japan Tourism Agency, which operates the Go To Travel program.

The issuance of coupons, either digital or paper, was added to the campaign in October to boost guests’ spending in local communities around their travel destination.

Up to 6,000 yen in vouchers will be issued per individual per overnight stay. Coupons can be used to take a bus or taxi, in addition to being honored at local restaurants or shops that are enrolled in the program.

(This story was written by Nobuaki Tanaka and Hidemasa Yoshizawa.)