VOX POPULI: Reruns among this year’s hit products amid the pandemic 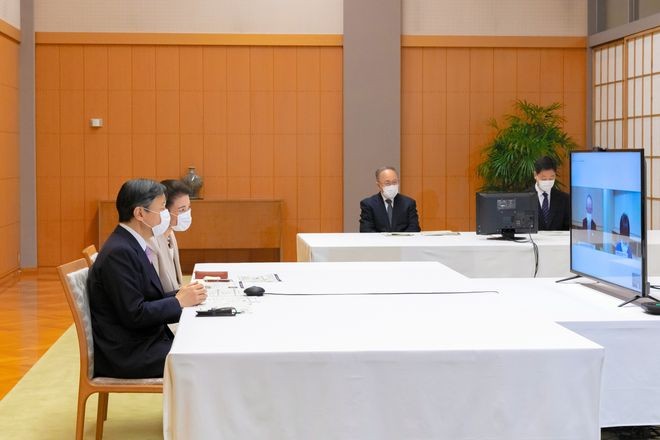 Emperor Naruhito and Empress Masako use an online system to interact with the public on Nov. 25. (Provided by Imperial Household Agency)

Around this time every year, organizations announce their annual rankings of big hits, harking back to products and events that were talked about a lot during the past year.

SMBC Consulting Co. has named “online life” and “infection prevention goods” as the east and west yokozuna in its list of biggest hits this year, based on the format of sumo’s “banzuke” ranking chart. They are easily predictable choices.

One surprise to me is the consulting company’s pick for No. 2 west maegashira, the sixth slot in the west column of the list: “rebroadcast and rerun.”

As the novel coronavirus pandemic has forced restrictions on TV and film shooting, many old TV dramas have been rebroadcast this year.

Many movie theaters have rerun old films. Some of these old-time dramas and movies moved the hearts of many young people and proved unexpectedly popular. Just imagine their impacts on old fans.

An Asahi Shimbun edition in July published a letter from one reader who wrote about how she enjoyed a rerun of “Aishiteru to Itte Kure” (Tell me you love me), a TV drama miniseries originally aired in 1995.

“As I immersed myself into the drama, I felt as if I were Hiroko (Mizuno, the main female character), not the middle-aged woman I am,” the reader wrote. Hiroko Mizuno, played by Takako Tokiwa, is an actress in the making who fell in love with a young hearing-impaired painter.

I, myself, was for the first time in more than four decades enchanted by “Mirai Shonen Conan” (Future Boy Conan), an animated TV series first aired in 1978, when I was a junior high school student.

At that time, I was captivated by the story about a boy’s ventures in a post-apocalyptic world where civilization has been destroyed by the final war. I, however, found myself unable to transpose myself into the hero’s situation as much as I could as a teenage boy.

Rather, I found myself empathizing more with “Ojii” (Grandpa), Conan’s adopted elderly grandfather, who actually raised him. I also thought a little about the feelings of Lepka, the villain of the story and the political leader of a science city.

I wondered whether the evil acts of Lepka, the leader responsible to feed the people, could be, in a sense, a result of his sense of duty gone too far. I ask those of you who have not seen the series to forgive me for getting a little carried away.

Revisiting a drama, an animated film, or a novel entails the joy of rediscovery. This is what I have learned from the corona--no, from Conan.