Crown Prince Fumihito and other members of his family stroll in the grounds of the Akasaka Estate in Tokyo on Nov. 14. He marked his 55th birthday on Nov. 30. (Provided by the Imperial Household Agency) 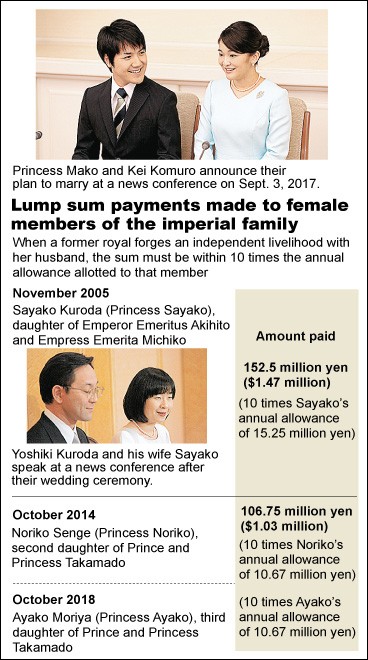 Princess Mako's determination to marry her college sweetheart is a much talked about topic in light of the long postponement in their wedding plans.

After her marriage, Mako will no longer be part of the imperial family. As such, she is entitled to a onetime payment to help her make a fresh start in life. The following explains the basis for deciding the amount to be paid.

Question: Crown Prince Fumihito said at a recent news conference that he “approves” of the marriage to Kei Komuro, his daughter's longtime boyfriend. Is it true that the government will provide her with funds when she marries?

Q: What is the imperial house economy law?

A: The law governs the imperial family’s finances and financial affairs. The basis for a lump sum payment is to “provide financial resources to help a former royal maintain their dignity.”

It is, so to speak, a “dowry.” Calculating the upper limit of the amount is set under the imperial house economy law and another relevant law. Up to 10 times the allowance assigned to a member of the house of a prince by the government will be paid tax-free as a onetime payment.

Q: When Mako gets married, how much will she be paid?

A: It will be up to 152.5 million yen ($1.47 million). But the exact amount will be decided before her marriage at a meeting of Imperial Household Economy Council, which comprises the prime minister and other senior government officials and approved later by the Cabinet. Given the maximum amounts paid in past cases, Mako’s allowance will very likely follow precedent.

Q: How does the public view these payments?

A: Criticism has arisen because the payments are funded by taxpayers, and this has been conveyed to the government and the Imperial Household Agency. But officials close to the agency contend that the amount is not unreasonably high, given the circumstances of the imperial family. They argue that it is difficult for imperial family members to hone professional skills to prepare for a career in the private sector because they had to devote themselves to official activities due to their position. In addition, they do not possess assets such as property, according to the officials.

Ensuring the protection of former royals is also an issue. Takako Shimazu, a daughter of the late Emperor Hirohito who married a commoner, became the target of attempted abduction. Securing a secure home for a former royal is an important matter.

A former royal lamented there was little money left over from the lump sum payment after the purchase of an apartment.