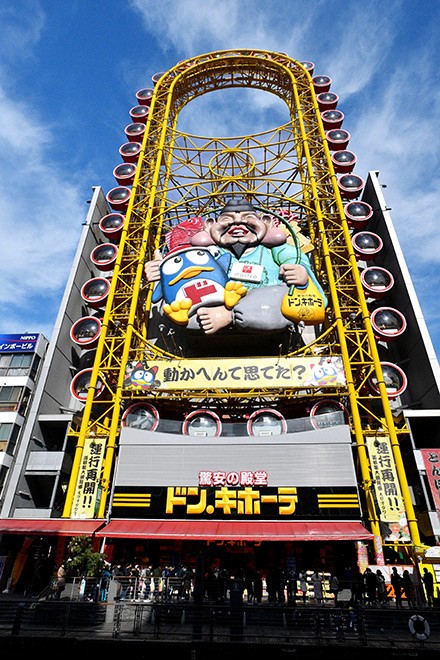 The Don Quijote outlet in Osaka restored the Ebisu Tower Ferris wheel standing next to the outlet in 2018. (Asahi Shimbun file photo)

A former president of the parent firm that operates the Don Quijote discount store chain is under investigation for suspected insider trading that Tokyo prosecutors contend netted an acquaintance with a hefty profit of 60 million yen ($575,000).

They believe the 57-year-old former executive urged his friend to buy stocks in Don Quijote Holdings Co. ahead of moves by leading retailer FamilyMart Uny Holdings Co. in 2018 to take over the company, according to sources.

The former president has consistently denied the allegations.

After the announcement of the bid, the price of a single Don Quijote Holdings share rose sharply from the 6,050-yen price on the day before the announcement. The market price went above the 6,600-yen ceiling that FamilyMart Uny had set to buy shares for the takeover, meaning the bid had failed.

According to sources, the former president contacted the acquaintance, a pachinko parlor operator, and allegedly suggested he purchase shares. The pachinko parlor owner is suspected of passing on the suggestion to his family members.

After the takeover bid was announced, the pachinko parlor owner sold off the shares he had purchased for a tidy profit. His family members also likely profited, the sources said.

Under the Financial Instruments and Exchange Law, anyone connected with a company can be found guilty of insider trading, even in cases when the person does not personally engage in stock trading.

They can also be found guilty if they pass on important company information to a third party with the objective of providing financial benefits to that party or even if they only encourage the purchase of shares without divulging company secrets.

In the latter case, the third party that actually purchases the shares is not legally liable. But prosecutors believe they have a case against the former president, who was obviously involved in the takeover talks because of his position but insists he never encouraged the stock purchases.

The pachinko parlor owner told prosecutors he simply acted on the suggestion of the Don Quijote executive, the sources said.

The former president joined what was then Don Quijote in 1993 and put in charge of the first store that opened in Japan. He became president in 2013 and also assumed the chief executive officer post in 2015, but resigned from both positions in September 2019.

An official with Pan Pacific International Holdings said the company was not involved in the matter in any way, noting that prosecutors' suspicions are directed only at the former president and his acquaintance.