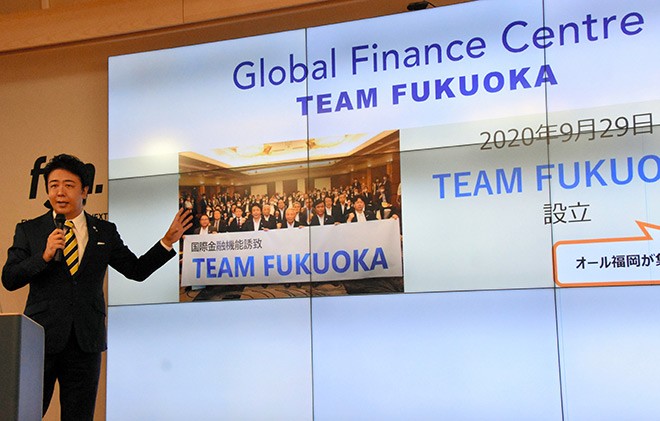 Fukuoka Mayor Soichiro Takashima outlines plans to establish the capital of Fukuoka Prefecture as a global financial center and invite foreign corporations and personnel to make Japan their home base. He was speaking Oct. 20 in Fukuoka. (Hayato Jinno)

Foreign nationals working in the financial industry would get tax breaks for overseas assets under plans to encourage more experts to settle in Japan and raise the country's standing as a global financial center.

The exemption would only apply to foreign nationals with expertise in the industry, however.

The central government and the ruling parties on Nov. 30 drafted the outcome of a study that reviewed requests from all ministries and agencies regarding tax system reforms scheduled in the next fiscal year.

Officials are expected to include the tax relief plans targeting foreign nationals in finance-related businesses in the outline of the reforms, which is scheduled to be drafted on Dec. 10 by the ruling parties.

Officials hope to entice human resources and businesses overseas to come to Japan by reducing the burden of inheritance and corporation taxes.

Under the plan, foreign nationals who have worked in the financial industry and lived in Japan for more than 10 years would be exempt from paying inheritance taxes for overseas assets under certain conditions.

Currently, foreign nationals who have lived in Japan for more than 10 years are obliged to pay inheritance tax for assets abroad.

The maximum rate of inheritance tax is 55 percent, higher than other leading countries.

Experts contend the high tax rate is a factor in preventing foreign personnel from settling in Japan.

Officials said they will discuss the range of assets subject to the exemption and other conditions later.

(This article was written by Satoshi Shinden and Tsuneo Sasai.)