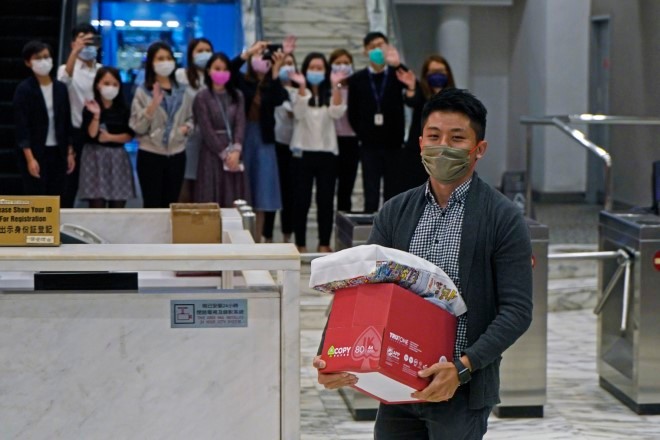 A journalist from i-Cable TV news carries his belonging after being laid off as his colleagues wave to farewell in Hong Kong on Dec. 1. (AP Photo)

HONG KONG--A Hong Kong television station said on Tuesday about 100 staff were “affected” by a shake-up as it seeks to remain competitive in a challenging economic environment, a move that has re-ignited worries over media freedom in China’s freest city.

Local media said 40 workers had been laid off from i-Cable, including the entire team from the station’s award-winning investigative section, News Lancet.

i-Cable told Reuters the restructure “does not have anything to do with media censorship.”

“In the face of daunting challenges, the group has devoted to adopting various measures to explore new business opportunities for competitiveness enhancement and sustainable development,” the station said in a statement, adding that about 100 positions among the group’s 1,300 staff would be affected.

“Under this circumstance, after a comprehensive review, it was unavoidable for the group to carry out an organizational restructure of various departments.”

The pay TV station did not say how many had been sacked.

Wong Lai-ping, deputy chief of the station’s China News team, which covers human rights on the mainland and reported from Wuhan province on the coronavirus outbreak, told reporters she was among those laid off. Ten other members of the team had resigned in protest against the lay-offs, she added.

Yau Ting-leung, 22, a journalist from the News Lancet segment who said he was fired after about six months with the company, said he was skeptical of the reason behind the decision.

The former British colony returned to Chinese rule in 1997 with the guarantee of freedoms not enjoyed on the mainland, including freedom of speech. Protesters who took to the streets for months last year complain that Communist Party rulers in Beijing are whittling away at those freedoms, a charge Beijing denies.

The Hong Kong Journalists’ Association said it was watching the situation closely as media have already come under pressure in the wake of a new national security law introduced by Beijing on June 30.

“This time the whole ‘News Lancet’ team of Cable News was laid off and the team has often reported against/on the police or the regime in the past year,” HKJA said in a statement.

i-Cable was founded in 1993 and is now owned by David Chiu, chairman and CEO of Far East Consortium.