Foreign trainees a huge help, but do we have to help them, too? 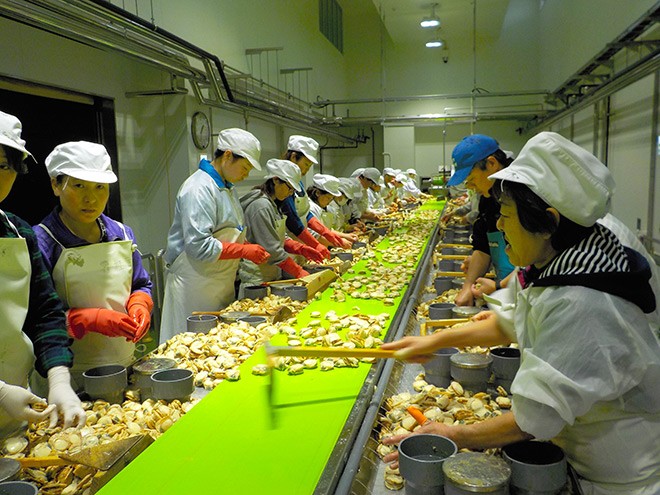 Foreign technical intern trainees are the lifeblood that keeps primary industries going in numerous rural communities, but many municipalities show little interest in doing anything to help the visiting workers feel at home.

This was the finding of a survey by The Asahi Shimbun and Masao Manjome, an associate professor of international economics at Tokai University. The survey revealed many municipalities leave the supervision of technical intern trainees up to the companies that take them in as workers.

Almost half of the municipalities surveyed said they had no idea how many technical intern trainees lived in their jurisdiction.

The survey covered the 100 municipalities that have the highest ratios of technical intern trainees to the local population based on statistics compiled by the Justice Ministry and other agencies. Questionnaires were mailed between mid-October and early November and all 100 local governments responded.

The Aichi Prefecture village of Tobishima, situated along the waterfront industrial area close to Nagoya Port, had the highest ratio of technical intern trainees at 6.16 percent.

The average ratio of the 100 municipalities was 1.84 percent, compared with the national average of 0.32 percent.

Although local governments are obliged by law to protect technical intern trainees when they run into difficulties, 42 municipalities responded that they did not know how many trainees were in their jurisdiction.

Thirty of the municipalities explained there was no need to do so because they left such matters to the private companies that hire the trainees.

Like every resident in Japan, trainees are listed in the residential registers of municipal governments. All the authorities had to do was to wade through the records to find out how many trainees were in their jurisdiction.

An official of one city in western Japan that actually kept tabs on trainees in its jurisdiction commented that “those that do not know probably have little interest in co-existing with the trainees.”

The survey also found that 72 municipalities said the trainees were vital to their economies, with the largest number citing the lack of manpower in their community.

Ten communities said the trainees were needed to continue the process of “fostering personnel in Asian nations.”

A key objective of the technical intern trainee program is to help young people from developing nations learn new skills.

The Technical Intern Training Law states that the program is not a means of “adjusting labor demand and supply.”

The number of trainees has increased rapidly due to a manpower deficit in many locales.

The central government in 2018 compiled a list of measures designed to make it easier for technical intern trainees to adjust to life in Japan.

But the survey found that only 14 municipalities had implemented steps to make that happen.

The presence of trainees has brought economic benefits to many local communities but few local authorities seem to feel any obligation to make things easier for the trainees.

Some of the local governments explained they did not have the staff to put such steps into practice.

But even Tobishima, with the highest ratio of trainees, still leaves matters up to the companies taking in the workers, despite its robust fiscal situation derived from double the tax revenue of the village government outlays.

Some local communities face difficulties because they already have sizable foreign populations.

For example, Soja city in Okayama Prefecture has a 1.41 percent ratio of trainees. It also has a large number of resident Japanese Brazilians, whom the city government supports through a range of measures.

“The accumulated know-how we have concerning long-term residents is of no help with technical intern trainees,” said Mayor Soichi Kataoka.

While many of the foreign residents remain in contact with government officials over things like schools and medical services for their families, technical intern trainees have little need because they are not permitted to bring family members to Japan.

The city of Ota in Gunma Prefecture was not among the 100 municipalities surveyed, but it faces similar problems to Soja. Ota has a large Japanese Brazilian community and has also hosted a sharp rise of technical intern trainees in recent years.

Ota Mayor Masayoshi Shimizu refers to trainees as “invisible people” because they only commute between the dorm provided by the company they work for and their workplace.

“There is little that the administrative sector can do because we rarely even see them,” Shimizu said.

However, some local governments are implementing steps to make trainees feel part of the community.

Monbetsu city in Hokkaido has a 1.63 percent ratio of technical intern trainees.

In 2018, the city government opened an “international exchange salon” inside a museum.

The objective is to foster communication between the trainees and local residents. The salon provides free Japanese language classes and the opportunity for trainees to experience a taste of Japanese culture by taking part in tea ceremony and flower arrangement.

“In many rural areas, the working age population is declining rapidly, so there is a great need for foreign workers to fill the vacuum,” said an official in the city government section operating the salon. “This measure is indispensable in having foreigners choose our city as their choice of residence.”

Other local communities distribute fliers to the workplaces of trainees that contain information about where to call for consultations as well as meetings to hear requests and offer advice.

The Shizuoka prefectural government is planning a training and exchange program for the 260 or so elderly care trainees from Myanmar, Vietnam and three other nations in the prefecture. The 14 sessions in December and January will teach the trainees about Japanese culture as well as basic elderly care skills.

A 26-year-old woman from Myanmar works for Tsunagu, a facility in Shizuoka city that senior citizens can use for short stays away from home.

She is looking forward to the program because it will give her a chance to share experiences with other trainees from her homeland.

“We only hear good things about her,” said Yoko Ebina, head of the Tsunagu facility, referring to the Myanmarese trainee. “She is kind and aware of the needs of the elderly.”

Ebina was keen to help the woman improve her Japanese language skills. She found out about the training program and applied on her behalf.

“We cannot have trainees return to their native land with bad memories,” said an official in the prefectural government handling the program. “As long as we are taking them in, we should provide the proper support.”

Manjome, who helped assist in the survey, said rural areas that wanted to attract trainees must implement more support measures.

“If that is not done, even if the number of long-term foreign residents increases in the future, they will end up going to urban areas, much like Japanese,” he said. “Rural areas need to learn how to create multicultural communities and take initiative and act as they take in more trainees.”

(This article was written by Makoto Oda and Yasusaburo Nakamura.)