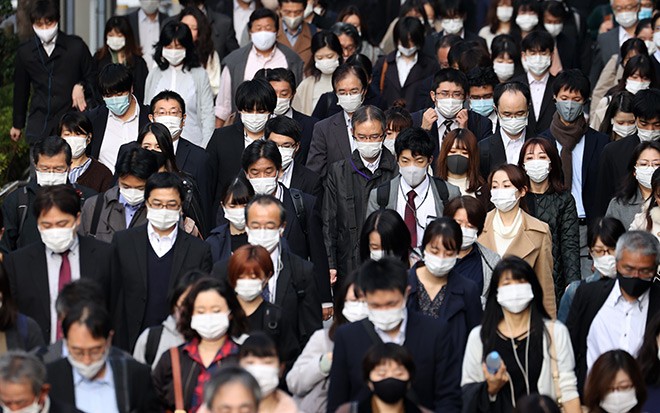 Commuters on a Tokyo street on Nov. 19 (Shiro Nishihata)

Business confidence among Japanese companies is rapidly improving after nosediving in early summer when the economic impact of the COVID-19 pandemic started to hit, an Asahi Shimbun survey shows.

According to the survey, 45 of 100 leading companies said economic conditions are expanding, a sharp rise from zero in the previous poll in June.

Only 15 firms replied that business conditions are receding, a notable drop from 97 in the June survey.

The results showed business sentiment has significantly improved after plunging temporarily to its worst level due to the novel coronavirus crisis.

But most of the companies that said conditions are expanding believe the pace is gradual, meaning the economy is still a long way from staging a full recovery.

The survey of 100 major Japanese companies is taken annually in spring and autumn. The latest survey was carried out between Nov. 9 and Nov. 20. Reporters interviewed the top management of about 40 percent of those firms in person or online.

“Only a few companies went bankrupt as many firms have benefitted from the government’s relief measures to support their financing, and financial institutions are also willing to lend money to companies,” said Masahiro Minami, president of Resona Holdings Inc.

Still, many companies remain pessimistic. Forty of the 100 firms said business conditions are at a standstill, a significant increase from two in the previous survey.

The number of respondents who replied that conditions are receding plunged to four from 91 in the previous poll, but the figure for those who said they are receding gradually rose to 11 from six in the June survey.

“The business situation remains severe in the service and tourism sectors, but it is recovering in the manufacturing sector,” said Toshihiro Kuriyama, president of Alps Alpine Co. “There is a clear polarization in business conditions among industries.”

Tetsuo Okubo, president of Sumitomo Mitsui Trust Holdings Inc., said, “The pace of economic recovery is not strong enough yet, and the situation, along with the outlook for the pandemic, remains uncertain.”

The survey also asked the 100 firms to choose up to two reasons for their assessment of economic conditions. Seventy-six, the most, cited “consumer spending.”

“Business conditions were extremely tough during the state of emergency over the pandemic, but the Go To campaigns stimulated economic activity by encouraging people to go out,” said Takashi Goto, president of Seibu Holdings Inc.

Of the other commonly cited reasons, 46 firms chose “corporate earnings,” 20 picked “exports” and 15 opted for “production.”

With regard to when the battered economy will bottom out, two-thirds of respondents said it already has. Of them, 28 replied that the timing was “around spring of 2020,” 35 answered that it came “around summer of 2020” and three said it was “around autumn of 2020.”

Fifteen firms replied that the economy would bottom out this winter at the earliest.

Many top company executives felt the country's economy hit bottom after the state of emergency was lifted, but some still remain cautious about the economic outlook.

“The economy temporarily bottomed out, but it could fall into a double-dip recession, depending on the infection situation,” said Yoshihisa Suzuki, president of Itochu Corp.

As for when economic conditions will return to pre-pandemic levels, 22 companies, the most, said the “first half of 2022.” Other answers varied widely.