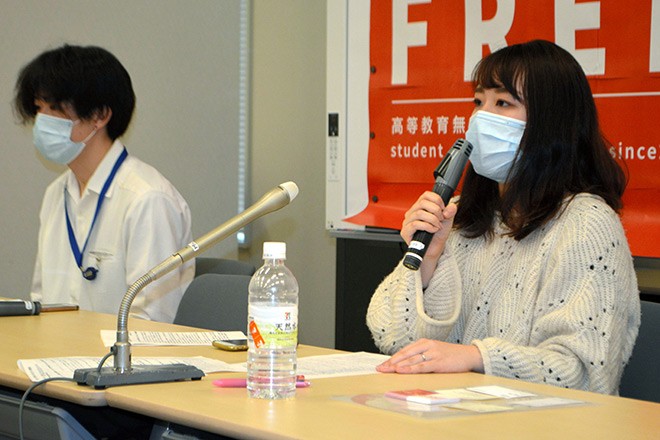 Shizuka Iwasaki, who heads the FREE students group, announces the results of a survey about the impact of the pandemic on students at a news conference in Tokyo in April. (Asahi Shimbun file photo)

Due to financial difficulties caused by the pandemic, at least 190 Japanese universities are expecting an increase in the number of students who quit or take a leave of absence at the end of the academic year in March.

That grim number is according to a survey by The Asahi Shimbun and the Kawaijuku Educational Institution.

Officials at the universities believe many students will not be able to afford tuition as their family finances have taken a hit from the novel coronavirus.

The prospects for these students are worryingly uncertain because the employment picture remains dismal, which means they will likely have a hard time earning a living once they leave school.

An increase in the number of young people with no vocational qualifications who have little chance of working in careers of their choice would destabilize society and cast a dark shadow over the future of the nation.

It is urgent for the government to consider additional measures to support students facing financial woes.

Universities have taken steps to bail out students, such as reducing or exempting tuition, allowing delayed payments and providing emergency scholarships. They have financed these measures mainly through donations and savings from postponing capital outlays.

However, they are running out of such financial resources while facing additional needs due to spending to enhance their telecommunication systems for online classes and prevent the spread of infections. Many universities said they are at risk of falling into financial straits.

It has also ensured that the program to offer tuition cuts and exemptions for low-income families will be applied as soon as it becomes clear that students will soon become eligible because their family incomes are affected by the pandemic.

Presumably due to these measures taken by universities and the government, the number of university students who dropped out during the April-August period fell from a year earlier to about 11,000, or 0.4 percent of the total, according to an education ministry survey.

However, no end is in sight for the public health crisis, and its social and economic effects are growing even more serious. The data offer no reason for optimism.

The economic impact on students is not the only challenge for higher education. As the nation has become gripped by a fresh wave of COVID-19 cases, some universities, mainly in urban areas, have reintroduced tight restrictions on access to their campuses and extracurricular activities.

The joint Asahi-Kawaijuku survey found many universities concerned about the mental effects on students during the pandemic.

Some respondents said they are unable to provide sufficient care for students because of difficulty in having face-to-face counseling sessions. Others said many students are suffering from accumulated stress as they have been unable to meet up with their friends.

Universities need to make greater efforts to assess the overall state of individual students, while the government should seek related information from the universities to provide better policy support.

It is vital to ensure that the systems and procedures will be user-friendly and solidly oriented to the needs of students seeking help.

One idea that merits serious consideration would be to temporarily expand the scope of the financial support program for low-income families to cover students of middle-class families as well.

Another would be to ease the conditions for forgiving the student loans offered by the Japan Student Services Organization, which are widely used. It would also help to simplify the paperwork for applying for such programs.

The government should also consider providing fresh emergency financial aid for students whose income from part-time jobs has declined.

There is not much time left until March, when most notifications of temporary or permanent withdrawal from school are submitted.

We all should ask ourselves what should be done to help as many students as possible to keep learning.

While the government’s fiscal crunch is also worsening, we cannot expect to have a bright future for our society if we fail to make vital investments in its future.