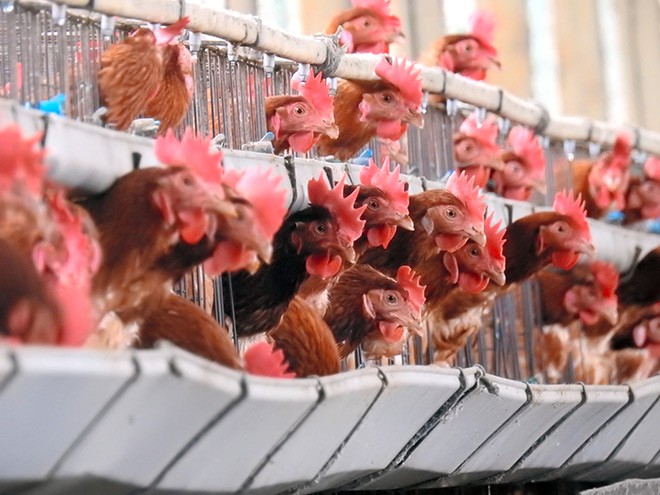 Battery cages are said to restrict the natural behavior of chickens. (Provided by Animal Rights Center)

The government rejected an international organization’s call for Japanese farmers to improve conditions for their chickens after a representative of an egg producer handed cash to the farm minister and requested the opposition, sources said.

The representative, a top official of Akita Foods Co., gave a total of 5 million yen ($48,000) to then farm minister Takamori Yoshikawa in 2018 and 2019 to seek his support for the egg production industry, according to the sources close to the company.

The first payment to Yoshikawa came in November 2018, roughly two months after the international organization issued a draft guidance requiring egg producers to install nest boxes and perches for chickens.

Most Japanese egg producers raise chickens in cages, meaning that large-scale renovation work would be needed to secure enough space at their farms to meet the organization’s proposal on promoting animal welfare.

“Please submit the agriculture ministry’s opinion of opposition to the international organization,” the sources quoted the former representative as saying to Yoshikawa.

In January 2019, the government submitted comments that opposed the draft guidance, saying the proposed measures would increase the number of cracked and dirty eggs as well as the mortality rate of chickens.

Since September last year, the international body has revised the guidance, which no longer requires egg producers to install nest boxes and perches. The contents of the guidance are still being reviewed.

The former representative said he gave the money to Yoshikawa “for the sake of the industry,” according to the sources.

The 5 million yen was not listed in income and expenditure reports on political funds by groups related to Yoshikawa, who is serving his sixth term in the Lower House as a representative of a Hokkaido district.

According to the sources, Yoshikawa, who was agriculture minister from October 2018 to September 2019, received money from the Akita Foods representative on three occasions: at a Tokyo hotel in November 2018; at the farm minister’s office in the capital’s Kasumigaseki district in March 2019; and in August 2019.

Yoshikawa, 70, has denied receiving the payments.

“There was no such thing,” he told The Asahi Shimbun last month.

He announced on Dec. 2 that he resigned from his posts in the ruling Liberal Democratic Party, citing hospital treatment for an irregular heartbeat.

The representative at Akita Foods had held that position since 1966. Now 87, he resigned from the post in August.

Public prosecutors searched the office of Akita Foods, based in Fukuyama, Hiroshima Prefecture, in July in a scandal related to former Justice Minister Katsuyuki Kawai and his wife, Anri, an Upper House member.

The couple, who represent constituencies in the prefecture, are charged with vote buying in connection with Anri’s campaign in the Upper House election last year.