Unfinished base for subs to defend mainland Japan found on island 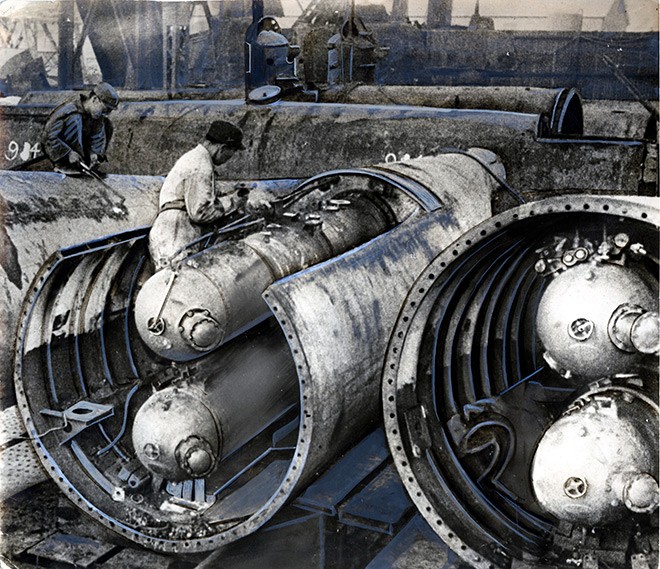 A Koryu-class submarine of the Imperial Japanese Navy being dismantled in Kure, Hiroshima Prefecture. The head of the submarine is in the foreground, with torpedo tubes installed one above the other. (Asahi Shimbun file photo)

MATSUE--Now overgrown with weeds and vegetation, the decaying ruins here offer stark testimony to the extreme attempts Japan made in a last-ditch effort to avoid defeat in the waning months of World War II.

The site on uninhabited Kushima island in the Sea of Japan was apparently intended to serve as a base for Koryu-class midget submarines developed for special attacks to defend mainland Japan.

Although construction of the facility was long known to experts through Imperial Japanese Navy records, the site had basically been lost to history until a citizens group made a first-hand inspection of the island in October.

They came across a tunnel three to four meters high, 3.5 meters wide and 14 meters long that appeared to have been dug by hand with pickaxes or other tools near a beach on the southern part of the island.

Other findings included a 1-meter-high, 4-meter-long stone wall, the ruins of a pier, a halfway dug bunker and the remains of a well.

According to a list compiled by the Maizuru Naval Facilities Department, three “underwater special attack bases” were planned for Koryu submarines: a deployment base, a dock and a crew training facility.

The number of the submarines planned for deployment remains unknown.

Shinji Wakatsuki, a former prefectural government official who serves as a coordinator for the citizens group, said entries in the list suggest the passageway was a communications tunnel and the stone wall was the ruins of the barracks.

Construction apparently began in or around June 1945 just before Japan's defeat, but the structures were never completed and left to decay after the war.

“They were overgrown with vegetation and weeds, but I think that the plan was to make the whole area around the beach into a base,” said Wakatsuki, 63. “Their existence was already known, but I think this is the first time to see them on site.”

The Koryu, a five-man midget submarine equipped with two torpedo tubes and a diesel generator, was a special weapon developed for the final battle for the mainland.

According to “Kaigun Gunsenbi: Kaisen-igo,” a publication on the Navy’s military equipment published by the Office of War History at the National Defense College (forerunner of the National Institute for Defense Studies), and other documents, the 26-meter-long submarine, with a displacement of about 60 tons, could travel at 16 knots underwater.

About 100 were built by the end of the war, but more than 500 were left unfinished.

Crew members trained at the so-called P Base in the Ourasaki district of Kure, Hiroshima Prefecture, with the submarines deployed to Kure, Shodoshima island in Kagawa Prefecture, Sasebo in Nagasaki Prefecture and elsewhere.

In “Shichirui Kyoiku Hyakunen-shi” (100-year history of education in Shichirui) published in 1975, there is an entry where Tomi Takai, who served as principal of a local public elementary school between 1945 and 1949, recalls: “When it was decided to build a naval special attack base (human torpedoes) on Kushima at short notice, aviator trainees from the Miho Naval Air Corps came here for tunnel excavation work every day via the Shichirui-toge pass.”

The school’s auditorium and one-story classroom were requisitioned by order of the civil engineering group at the Maizuru Naval Port to use as accommodation for aviator trainees, offices for officers and other facilities, according to Takai.

But Wakatsuki suspects that Takai might have had the wrong idea about the “human torpedoes,” which were known by the name of the Kaiten, because the Navy would have kept details about the base confidential.

Wakatsuki’s group plans to publish a book in January featuring more than 400 war-related ruins in Matsue, Izumo and Unnan in Shimane Prefecture with photos and maps. The submarine base on Kushima will be included.