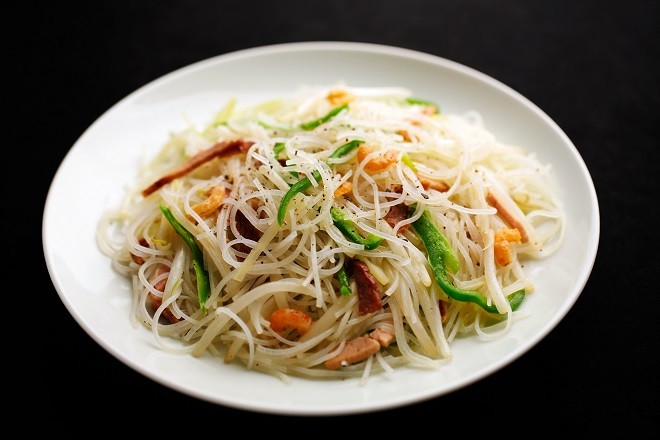 Are there ingredients or seasonings you want to master but feel they are out of reach?

Nam pla was one of those seasonings for this reporter, and it was unclear whether the bottle would ever get used up. But with overseas travel and dining out so difficult these days, this is a good opportunity to try your hand at an exotic meal with seasonings you don’t normally buy.

Nam pla is a Thai fish sauce made from anchovies. Its characteristic smell is not to everyone’s liking, but do not let that put you off: It softens a little through cooking and, since its flavor is different from soy sauce, it adds depth to the dish.

Be aware, though, that if you use too much, the flavor will become too strong and the salt content too high.

This week’s dish will turn out differently depending on what sort of nam pla or rice vermicelli you use. We tested this repeatedly, changing the amount and ingredients each time. As the noodles are stir-fried, they absorb the soup’s multilayered seafood flavors, and the water used to reconstitute the shrimp gets incorporated in their flavor.

The 70-gram bottle of nam pla became empty after cooking this week’s two dishes a few times over.

“Bifun,” the Japanese word for rice vermicelli, is written as “rice powder” in Chinese characters. According to the association of companies that produce or import the noodles in Japan, they are defined as “containing more than 50 percent rice powder as their main ingredient and are processed into a noodle shape.”

Rice noodles are found throughout Asia. In Vietnam, bifun is called “bun,” while the flat, ribbon-like noodles are called “pho.”

Glass noodles (“harusame”) are made from the starch of mung beans or potatoes and formed into noodles like bifun. They are popular in places like China, South Korea and Thailand, for example.

1. Reconstitute dried shrimp in 50 ml hot water. Bring generous amount of water to a boil in pot, add rice vermicelli and cook for 4 to 5 minutes over low heat. Drain and cut into lengths of 5 to 6 cm (PHOTO A).

3. Pour oil in frying pan and place on medium heat. When heated, stir-fry long onion over low heat. When it becomes tender, add shrimp, barbecued pork, green pepper and soybean sprouts in this order and cook over medium heat. Add sauce, bring to a boil (PHOTO C). Add rice vermicelli and stir-fry until no liquid is left. Serve on dish and sprinkle with pepper if desired.

Midori Kasai is a professor at Ochanomizu University and former chairwoman of the Japan Society of Cookery Science.

Finely slice onion, immerse in water, then drain. Cut coriander 3 cm in length. Combine all ingredients and mix with sauce made from 1 and 1/3 Tbsp nam pla, 2 tsp each of water, sugar, lemon juice, and bit of finely chopped chili pepper.

To make fish sauces like nam pla, seafood is pickled in salt so that it is broken down by its own enzymes, turned into a liquid and filtered. Soy sauce is made by adding koji mold to steamed soybeans and roasted wheat to turn them into koji. Then, yeast and salt are added, and it is left to mature before pressing. While microbes are added to soy sauce, fish sauce is fermented by natural microbes.