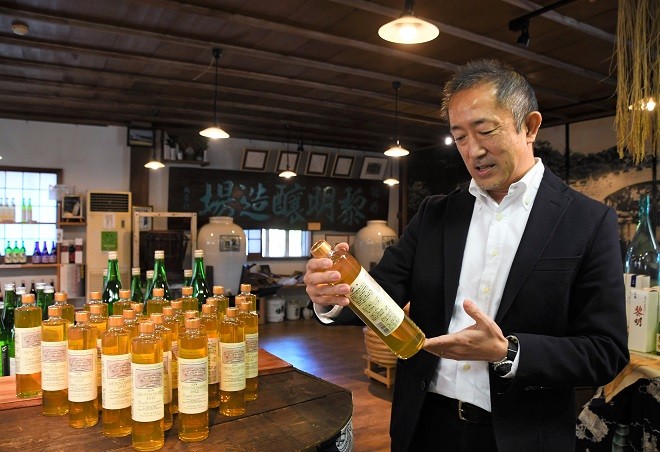 Kinokawa Inc. distills and produces the gin, called Dennoshin 1812, which is amber colored somewhat like whiskey.

"It is characteristically sweeter than other gins," said Shinsuke Seto, the company’s president.

Dennoshin is made from shochu or another base spirit and marinated with three times the normal amount of juniper berries.

Gin was brought to Japan through the Dutch trading post on tiny Dejima island in Nagasaki Bay during the Edo Period (1603-1867), according to historical records.

The first homemade gin in Japan was produced in 1812 by Shige Dennoshin, a "metsuke," or inspector, who was working under the Nagasaki "bugyo" magistrate at the time and took great pains to entertain Dutch merchants. His product tasted sweet because he could not find a way to remove the juniper berry resin's flavor.

Kinokawa re-created that flavor with its craft gin, which has been gaining attention since it was first released in June 2019.

The company now receives monthly orders for about 100 bottles, which are shipped to liquor shops in Tokyo and Osaka and Nagasaki prefectures.

It is far from the only Japanese brewing company getting in on the worldwide craft gin boom, where distillers use local ingredients to make their own flavorful spins.

The trendsetter in Japan was Ki No Bi Kyoto Dry Gin, released in 2016 by The Kyoto Distillery. It is distinctly flavored with high-grade "gyokuro" green tea from Kyoto Prefecture and "yuzu" citrus fruit.

Sakurao Gin, which is produced by Chugoku Jozo Co. in Hatsukaichi, Hiroshima Prefecture, is made using oyster shells, lemons and other ingredients.

Umegae Sake Brewery in Sasebo, also in Nagasaki Prefecture, released Yokitsuki Reigetsu in October 2019. It is a craft gin based on a sake, mainly flavored with fruits grown in the prefecture.

Satoaki Yamada, 57, an expert who works for Sakebunka Institute Inc,. said craft gin began spreading worldwide after the 2008 founding of the first gin distillery in Britain in 200 years.