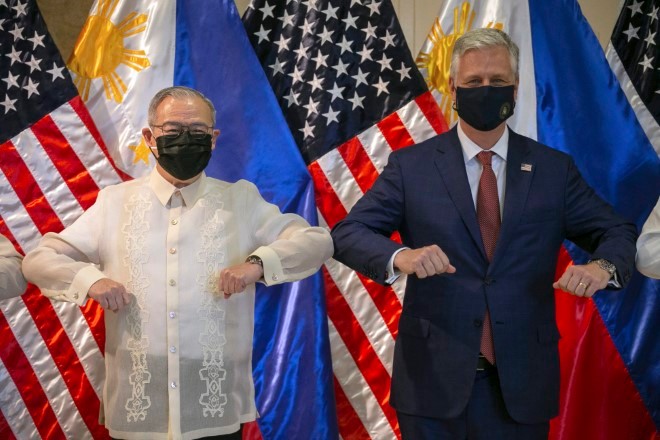 MANILA--The Philippines has received 1.4 billion pesos ($29 million) worth of military equipment from the United States, its defense minister said on Tuesday, part of efforts to bolster the country’s external defense and counter terrorism capabilities.

Equipment including sniper rifles and anti-improvised explosive device gear was handed over during a visit by acting U.S. Defense Secretary Christopher Miller, who is on a two-nation visit in Southeast Asia.

“The modernization of the AFP (Armed Forces of the Philippines) will ultimately allow us to respond more effectively to both traditional and non-traditional security threats to our maritime nation,” Philippines Defense Secretary Delfin Lorenzana said in a statement.

The Philippines is by far the largest recipient of U.S. military assistance in the Indo-Pacific region, having received 33 billion pesos worth of planes, ships, armored vehicles, and small arms since 2015, the U.S. Embassy in Manila said.

Last year, U.S. Secretary of State Mike Pompeo assured the Philippines it would come to its defense if attacked in the South China Sea.

The United States and China have been at loggerheads over issues from technology and human rights to Chinese maritime militarization, with each accusing the other of deliberately provocative behavior.

China claim to 90 percent of the South China Sea includes areas claimed by Brunei, Malaysia, the Philippines, Taiwan and Vietnam. An international tribunal in 2016 ruled that China’s expansive claim, based on its historical maps, is inconsistent with international law.