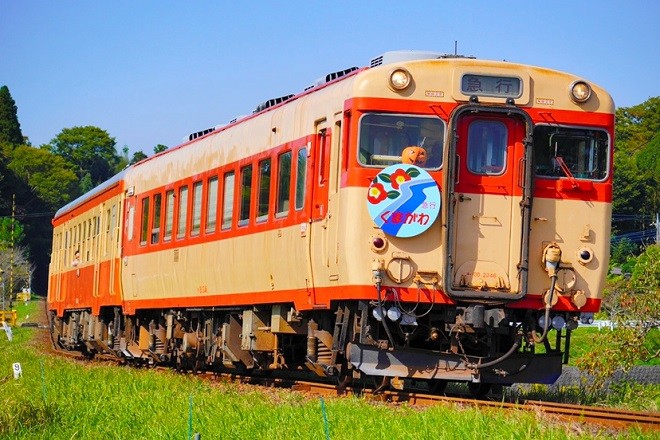 In business for more than a century, Takada Sekaikan, one of Japan's oldest movie theaters, reached out to a struggling entity trying to stay on the rails during the novel coronavirus pandemic.

One Sunday in mid-October, many people lined up in front of the theater in Joetsu, Niigata Prefecture, to see a special attraction.

The comedy-horror film to be screened was “Densha o Tomeruna: Noroino 6.4 Kilometers” (Do not stop the train: Haunted 6.4-km track,” created by Choshi Electric Railway Co., based in Choshi, Chiba Prefecture.

Small local railway operators nationwide such as Choshi Electric Railway, struggling in the aftermath of natural disasters and the COVID-19 crisis, are linking up to survive in the current harsh business climate.

As rail lines in rural areas offer residents and municipalities important means of transportation, railroad companies are boosting their cooperation to continue providing their services.

Its “Densha o Tomeruna: Noroino 6.4 Kilometers” shows the railway scrambling to operate a haunted train so the financially ailing firm can stay in business, taking advantage of its difficult circumstances as a film plot to make people laugh.

Following a huge typhoon in 2019 and amid the novel coronavirus pandemic last year, Choshi Electric Railway is short of funds and made the movie to keep itself operational. But it had difficulty finding cinemas to screen its creation amid the virus outbreak.

Because of that, Choshi Electric Railway asked other small railway operators for help. The official website of the film calls on “local rail corporations to contact us if facilities along the lines want to screen our work.”

As a friend of Katsunori Takemoto, 58, president of Choshi Electric Railway, Torizuka asked Michinari Ueno, 33, director of Takada Sekaikan, to show the film.

The showings attracted a total of 240 viewers over three days, drawing positive reactions from watchers who, for example, described it as “interesting because it shows a local railway working hard.”

“Few works can lure in so many people in the coronavirus crisis,” said Ueno. “I appreciate that.”

“The film is available mainly for viewing at public halls and cafes, and only a few cinemas will show it,” said Torizuka. “It was fortunate that Takada Sekaikan exists in our area.”

Asked why he helped another rail operator, Torizuka said, “The same thing could happen to my company tomorrow. We share the belief that local railways should work together with local communities to preserve our lines.”

Four other local railroad firms in Ibaraki Prefecture also screened the work at stations and other nearby sites at the request of the prefectural government’s traffic policy division.

“Rail operators currently have far fewer passengers due to the coronavirus outbreak,” said a prefectural division official. “We wanted to encourage the local railroad by joining hands.”

Three months or so after the film opened to the public, it hit cinemas in Tokyo, starting in December.

“I am really glad that other rail operators are offering their cooperation,” said Takemoto. “As we, railway corporations, had interacted with each other, I feel as if we were now cheering one another on.”

SUPPORT TO RECOVER FROM FLOOD

Kumagawa Railway Co., a third-sector company in Hitoyoshi, Kumamoto Prefecture, was so severely stricken by torrential rain in July, along with the COVID-19 pandemic, that operations of all its lines remain suspended.

Local rail operators across the nation rose up to assist Kumagawa Railway, such as more than 20 corporations selling memorial tickets and goods and organizing charity events to make donations for its recovery.

Yuji Nagae, 56, president of Kumagawa Railway, who also runs a hair salon in Hitoyoshi, became head of the firm five years ago and developed measures for tiny rail businesses throughout the nation to work together to improve their circumstances.

All 40 corporations belonging to the council comprised primarily of third-sector rail operators joined the project and started selling the notebook on July 10 immediately following the torrential rains that devastated Kumamoto Prefecture.

For that reason, railway businesses are actively supporting Kumagawa Railway to resume operations. In late October, a poster bearing the words “Never give up, Kumagawa Railway,” combined with an image of 25 officials from 21 major and other rail firms, was issued.

The 25 officials became acquainted with Nagae through events.

“Together we sought a way to cheer it (Kumagawa Railway) up,” said Atsuko Ito, 43, a publicity official of Akechi Railway in Ena, Gifu Prefecture, which called for the poster donation.

Nagae expressed his “sincere gratitude for their friendship.”

“They showed links between rail operators and a strong desire to preserve rail lines,” Nagae said.

Terumi Tanaka, a local journalist who authored “Local Tetsudo Toiu Kibo” (Local railways as a hope), noted that local rail operators, with the gap widening between successful and unsuccessful ones, tried to attract more passengers in many cases by teaming with  municipalities and residents before the new coronavirus pandemic.

“Most rail businesses, however, face serious difficulties such as the decreasing number of people living along their lines,” Tanaka said. “There are limitations to efforts by a single corporation to preserve the lines.”

Railways, according to Tanaka, were troubled by almost the same issues that can be solved by similar approaches and their know-how to overcome the challenges was not sufficiently shared among them.

“Railroad operators that are currently fostering mutual cooperation represent the ideal way they should work together,” she said.