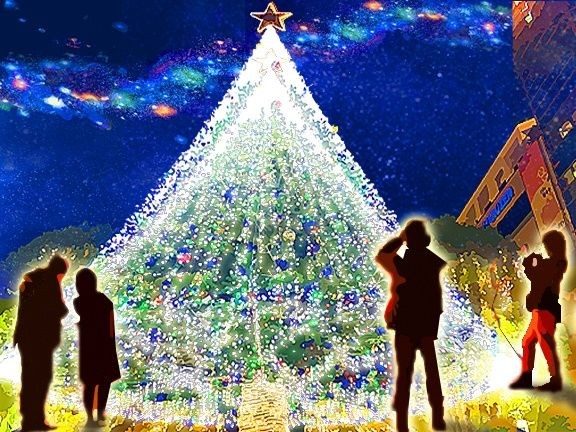 straw hats on the charter flight--walk in single file

harvest moon
the sand ebbing away
between my toes
--Mike Gallagher (Lyreacrompane, Ireland)

naked season
empty the bed
next to mine
--Anna Maria Domburg-Sancristoforo (The Hague, Netherlands)

for no reason
mom gives her son a hug
and a kiss
--Ed Bremson (Raleigh, North Carolina)

next to the fireplace--grandmother’s persimmon jam
--Angela Giordano (Avigliano, Italy)

The haikuist is ready for St. Nicholas to slide down the chimney. Her granddaughter played outdoors. Brayden Bennett rubbed his cold nose beside a fireplace in Misawa, Aomori Prefecture. Sue Colpitts has no plan to leave her home in Peterborough, Ontario.

the red nose
of my granddaughter--
winter day

Christmas Eve
not a star
in the sky

Aaron Ozment’s old home in the southwest of Japan was designed to let air swirl through during sweltering, steamy summers. Wooden floor slats and sliding paper doors let lizards, mice and insects move about freely all autumn. But he lives alone in winter.

Millipedes, I think
either that or centipedes
What good are landlords?

Bob Friedland shared a Slavic cultural anecdote experienced in Richmond, British Columbia. To this day he’s never gone hungry and has lived a life full of flavor. To render the haiku a perfect 5-7-5 syllables, the second line could be shortened to: Grandmother brought to our home.

Before we moved in,
Grandmother brought bread and salt to our new home.
Coarse rye and coarse salt.

Philmore Place harks back to younger, more peaceful days in Minsk, Belarus. Samo Kreutz added a touch of love to her toast in Ljubljana, Slovenia. A love for the taste of bread spread with lard has been passed down to Zdenka Mlinar in Zagreb.

rejuvenation--
she brewed tea and looks at
her wrinkled hand

mother’s smile--
on a warm piece of bread
pork fat

Kanchan Chatterjee fights back tears in the cold winds of Jamshedpur, India. Pippa Phillips heard it through the grapevine in Massachusetts. Isolated, Roberta Beach Jacobson was delighted to receive her first Christmas card in her Indianola, Iowa, mailbox.

A warm winter--
the persimmon seeds
told me so

As his male lineage always did, Ian Willey let his facial hair grow-in before winter. It is a sign, he said, “of the coming cold as reliable as the brilliant leaves and the sounds of geese high overhead.” Hemapriya Chellappan shared the sidewalk with birds that reside year-round in Pune, India. Stephen J. DeGuire snatched a coat filled with goose feathers when the temperature dipped in Los Angeles. Junko Saeki received a fluffy mohair wrap that she says, “does wonders for me.” Satoru Kanematsu liked what he saw in the mirror.

passing geese
Dad’s beard
is back

social distancing
a pigeon walks into
my comfort zone

Kanematsu checked to see how well his grandson pruned the pine Christmas trees in the family garden. With mechanical regularity, birds return to winter in Malta with Francis Attard. Yutaka Kitajima was pleased with the results from a medical checkup in Joetsu, Niigata Prefecture.

Xiana Jackson shared the uncanny feel of wearing a mask—the sensation was especially unsettling this winter for the 11-year-old student of haiku in English at Sollars Elementary School in Misawa, Aomori Prefecture. In previous years, she enjoyed watching her warm breath freely billow white in the cold. Vasile Moldovan enjoyed watching it snow in Bucharest.

Under my mask
I feel my own
Breath

Reporting from Cordoba, Argentina, Julia Guzman explained that while “winter brought us a lot of falling snow, it was especially white in Patagonia.” Incisors the size of mountains cut Helga Stania’s night sky in Ettiswil, Switzerland.

sanitizing the streets
tiny rainbows in the water
spread by trucks

Vasile Moldovan wishes he could run about collecting snowflakes on the tip of his tongue in Bucharest, Romania. Stephen J. DeGuire watched nature wash down Los Angeles. Hifsa Ashraf surveyed signs of hardship spreading around Rawalpindi, Pakistan. Milan Rajkumar left a hut behind in Imphal, India.

First snowfall--
my thoughts running
among the flakes

relief camp …
the tiny mounds
of bread and soil

T.D. Ginting found artistic inspiration in Murakami, Chiba Prefecture. Ana Drobot painted from dusk until dawn in Bucharest, Romania. Junko Saeki remarked how “the skies at daybreak” in Tokyo reminded her “of Michelangelo’s works at the Vatican.” The remarkable way the sun shines from above the clouds lasts for only for a few minutes, but the master caught them on his canvas. The haikuist needed just 17 syllables.

red wine--
painting a sunset
or a sunrise

Winter roses
petal on the wind
to cross me

morning wind
carries away the last leaf
of the chestnut branch

Steliana Voicu celebrated newfound love in Ploiesti, Romania. Rose Mary Boehm is a writer with both wine and cheese on her table in Lima, Peru.

engaged at a late age--
opening
a red wine bottle

Grapes, epoisse--
Napoleon knew what he liked
a woman with both

As a respected haikuist, Kanematsu celebrated 25 years of contributing to this column. John Hawkhead rounded out the year with a smile of satisfaction in Bradford on Avon, U.K. Heeding the advice, “out with the old, in with the new,” we look forward to receiving many postcards from all our readers in the New Year.

Having lived
this long with haiku
Elder’s Day

Tokyo onsen
rising through the steam
an old man’s smile

The next issues of the Asahi Haikuist Network appear Jan. 1, 15, and 29, 2021. Readers are invited to send haiku for New Year’s, the Year of the Ox, or a wolf howling at the cold moon, on a postcard to David McMurray at the International University of Kagoshima, Sakanoue 8-34-1, Kagoshima, 891-0197, Japan, or by e-mail to (mcmurray@fka.att.ne.jp).