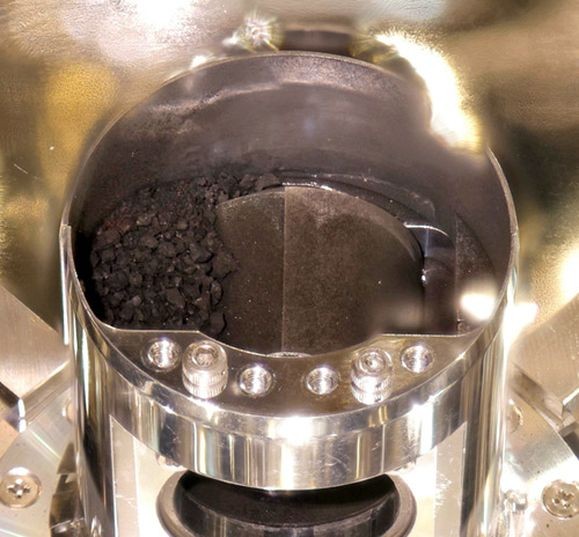 Black soil samples are seen inside a capsule that the spacecraft Hayabusa 2 brought back from a distant asteroid. (Provided by the Japan Aerospace Exploration Agency)

Among the science fiction novels about virulent extraterrestrial pathogens, "The Andromeda Strain" by American author Michael Crichton (1942-2008) is arguably a classic par excellence.

A military satellite crashes in a small rustic town in Arizona, practically decimating the entire population with a deadly microorganism the spacecraft picked up in outer space.

This 1969 techno-thriller has become one of the hottest reads while the COVID-19 pandemic rages.

I always thought that the threat from extraterrestrial microorganisms existed only in science fiction, but apparently, I was wrong.

I recently learned about the concept of "planetary quarantine" in outer space development.

The purpose of planetary quarantine, on the other hand, is to prevent terrestrial microorganisms from being exported to other planets and contaminating them, or vice versa. There is an international organization that assesses their safety.

How safe are the samples brought back earlier this month from the asteroid Ryugu by Hayabusa 2, an asteroid explorer operated by the Japan Aerospace Exploration Agency (JAXA)?

The samples are said to be harmless because there is no possibility of the existence of life on Ryugu.

But is that the gospel truth? I guess that's something any amateur sci-fi fan would be bound to wonder about.

When opened, the retrieved capsule was found to contain about one teaspoonful of black sand-like dust. This is quite a "huge amount," according to experts, and scientists will soon start checking for any organic content.

While following news about the Hayabusa 2 mission, I became acquainted with the theory that types of organic matter, which form the origins of life, were transported by meteorites and other debris from outer space.

Quarantine or not, it is fascinating to imagine the birth of life from interplanetary traffic. I will patiently await the research findings.