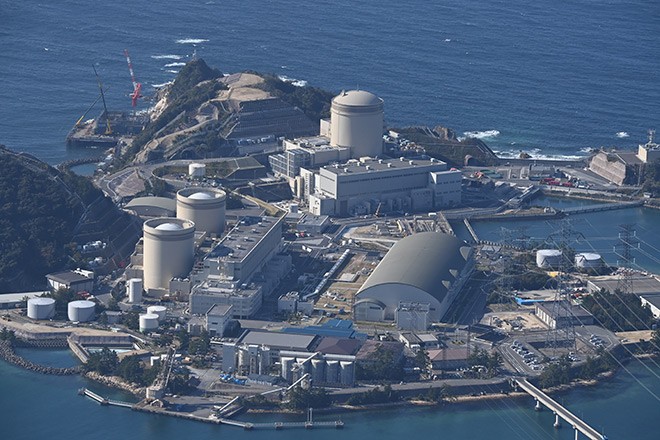 The No. 3 reactor at the Mihama nuclear power plant in Fukui Prefecture stands in the background. The two reactors in the foreground have been decommissioned. (Tatsuo Kanai)

The No. 3 reactor at the Mihama nuclear plant operated by Kansai Electric Power Co. first went online 44 years ago. The town assembly's decision came a day after the Federation of Electric Power Companies (FEPC) of Japan submitted a proposal to the economy minister about a new initiative for joint use of an intermediate storage facility for spent nuclear fuel in Mutsu, Aomori Prefecture.

Kansai Electric is keen to resume operations at the No. 3 reactor of the Mihama plant in January. The reactor has been offline for about a decade following the 2011 triple meltdown at the Fukushima No. 1 nuclear power plant.

Key local officials will also have to sign off on the plan, and no further decisions are anticipated before the year-end.

The Takahama town assembly in November also OK'd a resumption of operations at the Takahama plant's No. 1 and No. 2 reactors.

In response to questions from The Asahi Shimbun, Takahama Mayor Yutaka Nose said he would not make a decision before year-end. Mihama Mayor Hideki Toshima also said it would be difficult to reach a decision this month.

Moreover, once the mayors give their approval, the Fukui prefectural assembly and Fukui Governor Tatsuji Sugimoto must also give their consent. Only then can operations resume.

Sugimoto indicated earlier that he would only give his consent if Kansai Electric submitted a plan for an intermediate storage facility for spent nuclear fuel outside of the prefecture. The FEPC proposal submitted on Dec. 17 would allow Kansai Electric to use the Mutsu facility, but it is still not certain whether the local authorities in Aomori Prefecture will agree to that idea.

Joint use of the Mutsu facility would help lower hurdles facing Sugimoto in reaching a decision on the Mihama reactor, according to a source in the Fukui prefectural government.

Sugimoto is not expected to announce his decision until next year.

In 2016, the Nuclear Regulation Authority gave the nod to  operating the Mihama reactor beyond the legally set limit of 40 years after the facility passed rigorous safety screening procedures.

The only other reactor older than 40 years to be given such approval besides the No. 1 and No. 2 reactors at the Takahama plant is the No. 2 Tokai plant operated by Japan Atomic Power Co. in Ibaraki Prefecture.

The No. 3 reactor at the Mihama plant began operations in December 1976.

Five plant workers were killed and six injured during a steam explosion at the reactor in 2004.