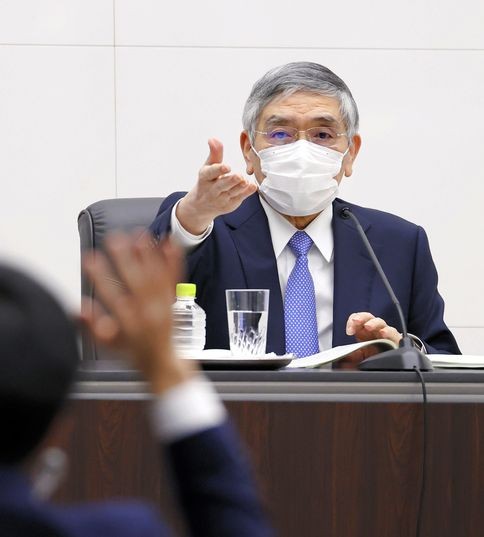 The Bank of Japan on Friday unveiled a plan to examine more effective ways to achieve its 2% inflation target, following in the foot steps of its U.S. and European peers as a renewed spike in infections threatened to derail a fragile recovery.

As widely expected, the central bank kept monetary policy steady and extended by six months a range of measures aimed at easing funding strains of companies hit by COVID-19.

In a surprise move, the BOJ said it will look at ways to make its policy "more effective and sustainable," as the blow to growth from the pandemic pushes inflation further away from its target and forces it to maintain its massive stimulus longer.

BOJ Governor Haruhiko Kuroda said the review will be more a fine-tuning of its market operations and asset purchases, rather than an overhaul of its yield curve control (YCC) policy.

But he said the central bank was open to introducing new tools and reviewing the way it buys exchange-traded funds (ETF) to address the potential side-effects of prolonged easing.

"We will examine operations under yield curve control and our asset purchases," Kuroda told a briefing.

"It's true this is an extraordinary policy for a central bank," he said of the BOJ's ETF buying. "It's therefore necessary to examine ways to make this step effective and sustainable."

The BOJ will announce the findings of the review in March.

The move underscores a growing concern among policymakers over the diminishing return and rising cost of prolonged easing.

Years of ultra-low interest rates have crushed commercial banks' margin, while its huge asset buying has drawn criticism for drying up liquidity and distorting market pricing.

"The BOJ won't change its policy framework but may review components such as its ETF buying, bond purchases and its view on what constitutes an appropriate yield curve," said Yasunari Ueno, chief market economist at Mizuho Securities.

At the two-day rate review ending on Friday, the BOJ kept intact its YCC targets of -0.1% for short-term rates and 0% for 10-year bond yields.

With the pandemic still hurting the economy, the BOJ decided to extend its fund-aid program, deployed in March through May to deal with the immediate hit from COVID-19, by six months.

The central bank said it is ready to extend the deadline of the package further if needed to support the economy.

The pandemic has added to headaches for major central banks including the ECB and Fed, which have conducted reviews on how to better battle a protracted low-growth, low-inflation environment with their dwindling policy ammunition.

Having conducted its own comprehensive review of its policy framework in 2016, the BOJ has argued there was no need to do another examination despite missing its 2% price goal for years.

Kuroda stuck to the view, stressing that he had no plans to tweak the BOJ's yield targets or abandon negative rates.