The Class 8620 locomotive, Japan’s first major mass transportation model, is believed to be the inspiration for the train featured in “Demon Slayer the Movie: Mugen Train.” (Video by Kohei Kano) 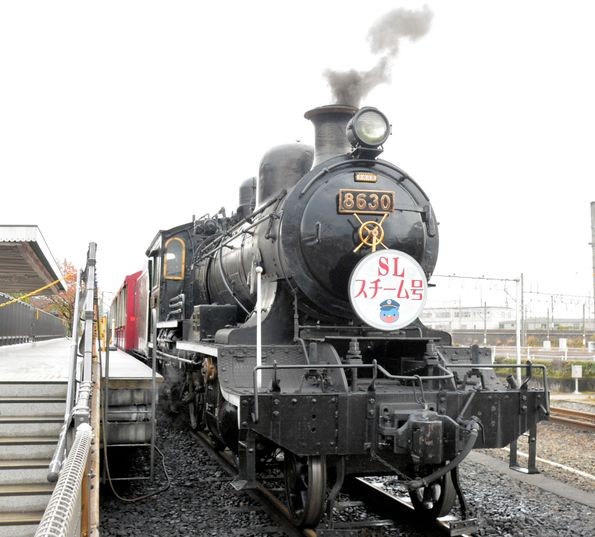 A railway museum is pushing an “inconspicuous” century-old steam locomotive into the spotlight after unconfirmed rumors spread that it inspired the setting for Japan’s greatest box-office hit, “Demon Slayer the Movie: Mugen Train.”

The Class 8620 steam engine, generally known as Hachiroku, was designed in the Taisho Era (1912-1926), when the movie is set, and fans of the anime have already noticed the similarities with the train in the film.

Class 8620 locomotives are preserved across Japan, and they are now gradually drawing “Demon Slayer” fans.

Yuta Watanabe, 27, a civil-service worker from Ogaki, Gifu Prefecture, visited the Kyoto Railway Museum in Shimogyo Ward on Oct. 24 after learning about the steam locomotive on the Internet. He had watched the “Demon Slayer” movie a few days earlier.

“I wanted to see the Mugen Train running,” Watanabe said.

In the film, the protagonists board a Mugen Train to kill a demon.

A Class 8620 locomotive is among the trains the museum operator runs on its grounds to carry visitors. It drives with a loud whistle while billowing smoke.

The locomotive’s driver cab and chimney reminded Watanabe of a fight scene from the movie.

“Their sizes appear slightly different, but they look very similar to each other,” Watanabe said of the real and film trains. “I was impressed that the train was reproduced in the movie in such exquisite detail.”

Hiroto Nakagawa, 34, an official of West Japan Railway Co. in charge of maintenance of the locomotive, has not watched the film, but he said a train from promotional material was “identical in appearance” to the Class 8620.

According to Nakagawa, Mugen Train and Hachiroku both have two protuberances on the top to keep steam as well as larger wheels specially designed for passenger locomotives. And they both lack smoke deflectors to protect rail staff from the discharged smoke, as such equipment was not widely used during the period.

But an expert in animation would not confirm that claim.

A representative of anime maker Aniplex Inc., which distributes the film along with Toho Co., said, “I cannot answer questions about the model of the steam locomotive and the location in the movie.”

Nakagawa did not appear troubled by the lack of confirmation.

“The steam locomotive was rather inconspicuous before, but now it’s attracting attention in an unexpected way,” Nakagawa said. “From the bottom of my heart, I would like people to ride it.”

Between 1914 and 1929, 687 Hachiroku cars were manufactured as Japan’s first mass-produced passenger locomotives. They can operate at up to 97 kph.

The first-built 8620 train is preserved at the Ome Railway Park in Ome, western Tokyo.

Kyushu Railway Co. keeps an operational Class 8620 locomotive, the only one available outside Kyoto, for special events. In November, the train ran between Kumamoto and Hakata with the Mugen Train logo on its front section.

The Miyoshi Mononoke Museum in Miyoshi, Hiroshima Prefecture, which owns an immovable Class 8620 train, said “Demon Slayer” fans started coming to the facility in late October. It opened the fence on Nov. 22 and 23 in a three-day holiday period to let visitors take close-up photos of the locomotive.

The Kyoto Railway Museum is currently holding events themed on the anime work through March 14 with such parties as the operator of the Toei Kyoto Studio Park in Kyoto’s Ukyo Ward.