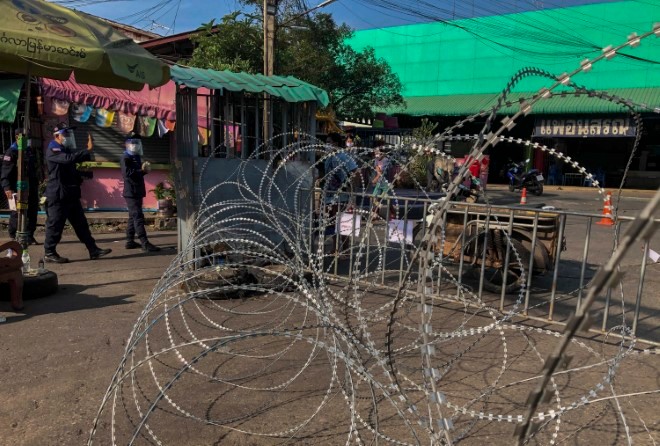 A shrimp market is closed and barbed-wired in Samut Sakhon, south of Bangkok, on Dec. 20. (AP Photo)

SAMUT SAKHON, Thailand--Thai Prime Minister Prayuth Chan-ocha on Tuesday blamed a spike in coronavirus cases on illegal migration, after the country’s biggest outbreak yet saw more than 1,000 infections, mostly among workers from Myanmar at a seafood market near the capital.

Prayuth said he might this week announce new health regulations ahead of New Year celebrations and attributed the latest outbreak in Samut Sakhon province to networks smuggling people into Thailand, which has so far had among the world’s lowest coronavirus caseloads.

“This latest flare-up of infections in Samut Sakhon is primarily due to such illegal immigrants and they have brought much grief to the country,” he said in a statement, parts of which he read in a televised address.

Prayuth said he would meet his COVID-19 task force this week and discuss “additional regulations that may be appropriate for the evolving situation,” without elaborating.

Health officials reported 427 new coronavirus infections on Tuesday and urged about 1,000 people from a quarter of the country’s provinces who had visited the seafood center this month to report to authorities.

“But don’t panic. Anybody who went should be tested,” taskforce spokesman Taweesin Wisanuyothin said.

The new cases include 16 people in eight different provinces, with five of the infections in Bangkok.

Some 397 cases were migrants mostly from Myanmar, a major source of labor in the seafood industry, adding to an outbreak that emerged at the weekend when hundreds of tests among asymptomatic workers came back positive.

More than 1,100 cases have been traced back to the now shuttered center, a commercial area where scores of vendors typically deal in shrimps and other seafood for distribution nationwide.

Thailand had until the weekend recorded about 4,300 cases and just 60 deaths, a containment success attributed largely to its swift contact tracing and strict entry requirements and quarantine.

Authorities have suspected some workers may have entered the country illegally as infections soared in neighboring Myanmar, where about 117,000 cases have been recorded.

At least a dozen infected Thai nationals are also known to have returned from Myanmar in the last month without passing through immigration or undergoing quarantine.

In Samut Sakhon, an estimated 4,000 people were in isolation around the seafood market, with volunteers distributing food to those confined to their rooms.

Varunthorn Mathiprechakul, 22, who owns a shrimp stall, said he wanted to check on his 26 isolated employees from Myanmar. “I’m not sure whether the government provides enough food for them,” Varunthorn told Reuters.

“I never thought that this would happen because Thailand has had no new cases for months,” he said.