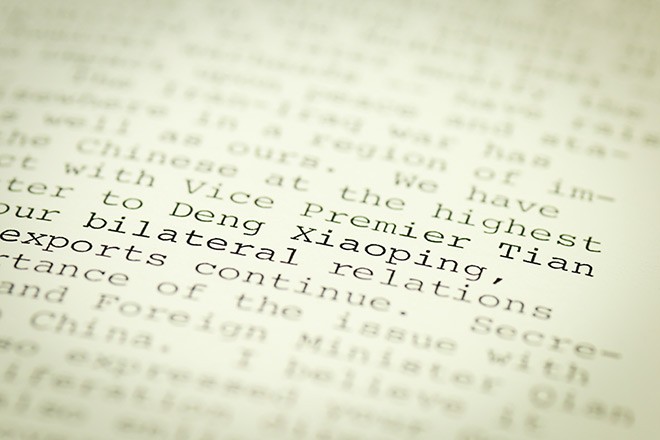 Declassified diplomatic documents from the late 1980s released Dec. 23 by the Foreign Ministry offer a rare glimpse into concerns raised by U.S. President Ronald Reagan about China’s missile exports to the Middle East.

The archive mainly deals with the period around the end of the Cold War.

Correspondence between Reagan and Prime Minister Noboru Takeshita also reveals that the U.S. president not only raised his concerns about the missile exports directly with Chinese supreme leader Deng Xiaoping but also asked Takeshita to bring up the issue when he visited China to meet with Chinese leaders.

The newly released papers surprised a number of scholars because the concerns raised by Reagan have not emerged in those declassified by the United States.

Confidential letters exchanged between Reagan and Takeshita between 1987 and 1989 show that the Reagan administration was in the process of ratifying the Intermediate-Range Nuclear Forces Treaty with Russia after the agreement was signed in 1987 by Reagan and Soviet General Secretary Mikhail Gorbachev.

But Washington was also critical of intermediate-range missile exports by China to the Middle East while the war between Iran and Iraq was raging.

In a letter dated Aug. 6, 1988, to Takeshita, Reagan wrote: “China has supplied Saudi Arabia with Intermediate Range Ballistic Missiles. This development, and reports suggesting other possible Chinese exports of ballistic missiles to countries in the Middle East--including some with a capability to later modify the missiles by installing chemical weapons--have raised serious concerns about the impact upon peace and stability in the Middle East.”

Reagan continued: “We have pursued our concerns with the Chinese at the highest levels. I raised the subject with Vice Premier Tian (Jiyun) and recently have sent a letter to Deng Xiaoping, underscoring the dangers to our bilateral relations if Chinese ballistic missile exports continue.”

Takeshita was scheduled to visit China in late August that year and Reagan pointed out in his letter how important stability in the Middle East was to Japan, which depended on the region for its petroleum imports.

“I believe it would be very helpful if you also expressed your Government’s concern over missile proliferation directly to the Chinese leadership,” Reagan wrote. “We are consulting intensively with the Soviet Union. It is important that China not perceive its missile exports as ‘only’ an American concern.”

After his China visit, Takeshita sent Reagan a letter dated Sept. 9, 1988 in which he wrote, “I called attention to the Chinese leadership about missile sales that are one of the matters of great concern to us.”

Reagan sent a reply dated Sept. 14, 1988 in which he expressed gratitude to Takeshita.

“(The Chinese) response was constructive and I believe this positive tone owes much to your willingness to raise this concern personally to the Chinese leadership,” Reagan wrote.

However, the primary purpose of Takeshita’s trip to China, which came on the 10th anniversary of the signing of the Japan-China Peace and Friendship Treaty, was to stress further cooperation in economic and cultural matters. It is believed that Takeshita did not make a particularly strong case about China’s missile exports.

Among documents released by the Foreign Ministry in 2019 were minutes of the meeting Takeshita had in Beijing with Premier Li Peng.

They show that Takeshita simply stated that the relevant official in charge would later explain the issue regarding missile exports. Li told Takeshita that raising the matter was tantamount to interfering in China's domestic political affairs and he also criticized the United States for its arms sales to Taiwan.

What makes this year's trove of documents so important is that Foreign Ministry officials were not able to find relevant records already released by the United States on the issue that brought Japan into the picture.

Japanese and U.S. experts on national security issues were also unaware of the concerns raised by Reagan regarding China’s missile exports.

“That was a period of heightened concerns about missile proliferation in the Middle East due to the Iran-Iraq war,” noted Ken Jimbo, a professor of international relations at Tokyo's Keio University. “If Saudi Arabia strengthened its missile capabilities, the relationships between various nations in that region would have become much more complicated and could have prompted Israel to make a first strike.”

Sugio Takahashi, who heads the Defense Policy Division at the National Institute for Defense Studies, pointed out that the documents showed exchange was possible on international and strategic issues even at a time when major trade friction existed between Japan and the United States.

He also noted that China was able to increase its intermediate-range missile production during the period until the end of the INF treaty between the United States and Russia last year.

“While ballistic missiles have been exported mainly from North Korea, those have come under U.N. economic sanctions,” Takahashi said. “If other nations turn to China for missile imports, similar issues could arise in the future.”

Gregory Kulacki, China Project manager with the Union of Concerned Scientists, a U.S. nongovernmental organization, said: “I’ve seen no other documentation of the call. But there is a declassified memo detailing visits by (U.S. Secretary of State George) Schultz and (U.S. Defense Secretary Frank) Carlucci during that same period.”