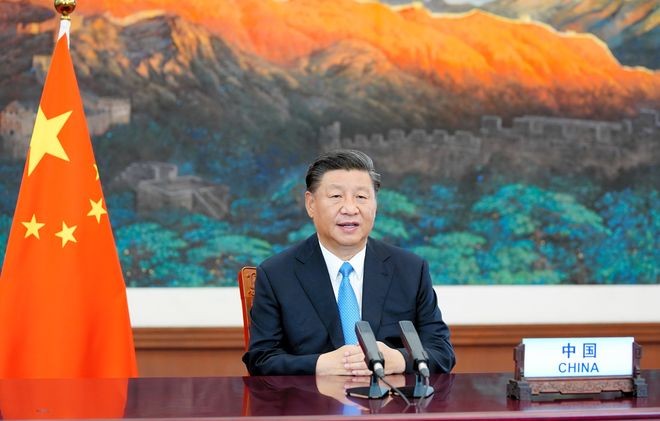 Chinese President Xi Jinping speaks in a pre-recorded message which was played during the 75th session of the United Nations General Assembly on Sept. 22, 2020, at the U.N. headquarters in New York. (The Xinhua via The Asahi Shimbun)

Chinese President Xi Jinping jolted the economic order in the Asia-Pacific region when he said China was considering joining the Trans-Pacific Partnership trade agreement that the United States left under the Trump administration.

Now that an agreement has been reached under the Asia-wide Regional Comprehensive Economic Partnership (RCEP), making it possible for Japan and China to co-exist under a mega-free trade agreement (FTA), what are the next moves that Japan should make?

Naoko Munakata, adviser to the Dai-Ichi Life Research Institute Inc., was asked her views on the future course Japan should take. She served as commissioner of the Japan Patent Office and was closely involved in negotiations revolving around the FTA with Singapore that was the first for Japan as well as the TPP.

Question: At the Asia-Pacific Economic Cooperation (APEC) forum meeting in November, Chinese President Xi Jinping said that China was considering joining the TPP. Do you think he was serious?

Munakata: I believe it was a strategic ploy to take advantage of the timing when the United States was too busy to pay attention to trade policy developments in Asia. Having won the U.S. presidential election by a narrow margin, President-elect Joe Biden will face a number of policy areas he has to address immediately so rejoining the TPP is not likely high on his agenda. It would cost China nothing to test the waters in the absence of the United States.

The TPP has rules concerning state-owned companies, subsidy discipline and digital rules that are not compatible with China’s political structure or industrial policy. The Xi administration has become heavily involved in the economy by pushing forward rapidly to strengthen industrial competitiveness. I do not believe it is possible for that administration to also take part in the TPP that calls on member governments not to distort the conditions for competition.

Q: Many of the standards in the TPP have been frozen since the United States left the agreement so there are some who say the standards now in place are not very high. For example, the strictest rules concerning state-owned companies have been met by nations such as Malaysia, Singapore and Vietnam, where the Communist Party has one-party rule. That has led some to say that China would also be able to meet those rules. What is your opinion?

Munakata: If China were to join the TPP, I predict that it will ask that the promises it makes will enable it to maintain its systems and policies. I think that will mean that even if China accepted on the surface the rules set by the TPP, it would make sure to secure major exceptions so there would be no actual changes required. Given the impact China’s industrial policy has on the world economic order, we cannot discuss it at the same level as Vietnam, Malaysia and Singapore.

When China joined the World Trade Organization (WTO), the world was expecting it to become a “responsible stakeholder” that matches its economic scale and power. Its accession to the WTO, however, was not enough to make that happen. The manner in which China is allowed into the TPP will be a major issue for the world economy. It is only until the point in time when China's entry is accepted that the prospect of participation can function as leverage to make China change its ways. Although the United States left the TPP under the Trump administration, it should join in the discussions on how to deal with this issue recalling where it began envisioning a high-level framework among like-minded nations.

Q: Toward the end of the 1990s, Japan moved ahead of the United States and consented to China joining the WTO. But hasn’t the situation changed greatly since then?

Munakata: When the world accepted China joining the WTO, there were expectations that along with liberalizing its economy, China would also change politically but that did not happen. Of course, China is not a monolith so there may be some who feel that committing to a high level of rules will provide further momentum for reform, but I doubt those voices are very large.

Q: What is your view of China’s posture toward the RCEP?

Munakata: I feel that China kept the reduction and elimination of tariffs under the RCEP at a low level because it wanted to use it as a bargaining chip in the future.

Q: Do you mean that during the RCEP negotiations, China left some room to lower tariffs for the negotiations related to its joining the TPP?

Munakata: If we look at what was agreed to under the RCEP, the percentage of tariff lines subject to tariff elimination for industrial goods for China, which is the largest producer of such goods in the world, was only 86 percent, the second lowest behind Cambodia. And for major items for which tariffs will be eliminated, there are quite a few that have set periods of 10 years or more before elimination. There are some products with periods of more than 20 years.

If China were to join the TPP, having tariffs reduced by a large margin for exports to its huge market might seem attractive. Once the TPP rules are relaxed seeking such short-term gains, however, leverage against China to reform its market will be lost forever. That would not be desirable for either Japan, which needs stable development of its economic ties with China, nor the future of the global trade order.

Q: When an agreement was reached on the TPP, then U.S. President Barack Obama said that he did not want China to be making the rules. But with Japan having been overtaken by China in economic scale and with the growing importance of territorial issues, including the one over the Senkaku Islands, hasn’t there been greater emphasis on the geopolitical significance of the TPP?

Munakata: One factor behind the lack of progress in WTO negotiations was that while China had grown rapidly and heightened its competitiveness, it has continued to stress its standing as a developing nation and would not march in step with advanced nations to move toward greater liberalization. To overcome that situation, we thought,  high-level rules should be established first without China and create a sufficiently large market with member nations committed to such high-level rules so that there would be a strong economic incentive for China to join. When Japan was considering joining the TPP negotiations, it aimed to kill two birds with one stone by overcoming domestic issues (such as agricultural policy) on one hand, and also switching the forum for trade talks to break the logjam vis-à-vis China. The Japanese public came to view the TPP as a benefit also in terms of national security after the Senkaku incident, as far as I recall.

Question: Japan took the initiative after the United States left the TPP to reach an agreement among 11 nations, but Chile, Peru, Brunei and Malaysia have still not ratified the agreement due to domestic circumstances. Thailand had initially been positive about joining the TPP but the negative economic effects of the novel coronavirus pandemic has led it to change its stance.

There has arisen greater criticism against free trade, including in the United States. But South Korean President Moon Jae-in has indicated he was considering joining the TPP. What do you make of such moves?

Munakata: The political reality is that the priority of creating trade rules becomes lower when the economic situation deteriorates. In particular, the novel coronavirus pandemic has further heightened the recognition about economic disparity. But to turn one’s back on globalization would be a mistake. The disparity will not disappear with a move toward protectionism. On the contrary, that would only further stagnate the economy and could lead to further decreases in revenues to pay for social welfare and educational investment. The TPP member nations reached a high-level agreement after very difficult negotiations. I hope that any nation or region that is thinking about joining the TPP does so with the strong determination to become a partner that shares the common understanding of the strategic significance of the TPP and is willing to work hard to spread the range of members. The contents of the agreement should not be weakened simply to increase the size of the arrangement. Aside from the TPP, further discussions should also be held among like-minded nations on establishing international rules that can deal with new developments such as greater digitalization of the economy and working toward a carbon-neutral society that have picked up speed due to the novel coronavirus pandemic.

Naoko Munakata entered the then Ministry of International Trade and Industry in 1984 after graduating from the Faculty of Law at the University of Tokyo. She served as director-general of the Multilateral Trade System Department and the Trade and Economic Cooperation Bureau. She also served as an executive secretary to then Prime Minister Shinzo Abe before becoming commissioner of the Japan Patent Office. She has an MBA from Harvard University.