Koreans’ voices about hardships in Japan being digitally saved 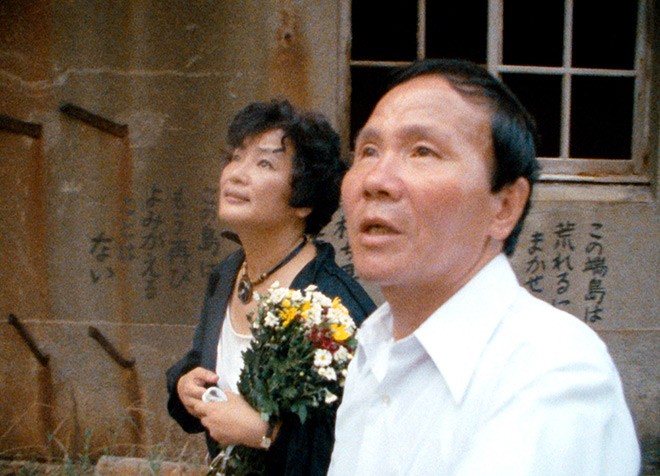 This scene from restored footage shows Suh Jung-woo, right, on a visit to Battleship Island with Park Soo-nam. (Provided by Park Soo-nam)

CHIGASAKI, Kanagawa Prefecture--Suh Jung-woo was only 14 when he was taken to Hashima island off Nagasaki during World War II and made to work in a coal mine.

“It was 37 to 38 degrees in the pit. I felt so thirsty from the heat, and I could seldom stand the pain,” Suh, an ethnic Korean, recalled of his misery in an interview in 1985.

“I ate 20 percent unpolished rice and 80 percent bean cake, as well as sardines cooked whole in an iron pot. I often suffered from stomach troubles.”

Documentary footage shot by film director Park Soo-nam is being restored for digital archiving to keep alive the experiences of about 100 people she interviewed, mostly first-generation Korean residents in Japan like Suh.

“My films contain the ‘han’ of the first-generation Koreans,” Park, 85, said, citing the keyword of Korean culture that is typically translated as resentment, sorrow or bitterness.

The Koreans who appear in her films include survivors of the 1945 atomic bombings of Japan, wartime laborers and former “comfort women,” who were forced to provide sex for Japanese soldiers during World War II.

The Korean Peninsula was under Japan’s colonial rule from 1910 through the country’s defeat in the war in 1945.

HAPPIER IF HE HAD DIED

A team of workers started from the oldest of Park’s footage from 1985 and has already restored about 10 percent of all the films.

“I attempted many times to jump into the sea, believing I would be happier if I had died,” Suh, who has since passed away, tells Park in a restored piece of footage.

According to Park, Suh was reassigned to Mitsubishi Heavy Industries Ltd.’s Nagasaki shipyard & machinery works in Nagasaki after working on Hashima, known as Battleship Island. He was exposed to the blast of the atomic bomb while he was working there on Aug. 9, 1945.

She began interviewing first-generation Korean residents in Japan in 1965.

When she visited Hiroshima, Korean survivors of the Aug. 6, 1945, atomic bombing of the city initially would not tell her anything.

Park moved into what was known as the “atomic bomb slum,” where those survivors lived, and worked with them at the sites of unemployment relief projects, wearing “jika-tabi” rubber-soled footwear. She was finally able to hear their experiences.

She also interviewed people who had been forced to work at coal mines on Battleship Island and in the Chikuho Coalfield in Fukuoka Prefecture.

At the time, she only recorded their voices on cassette tapes and published their oral testimonies in books.

Park, however, realized one thing while she was doing her research.

“Many of my (Korean) compatriots spoke poor Japanese and could not say in words what they had in their minds,” she said. “They sometimes uttered no words, but they trembled all over, with their faces quivering. That was their han. I had no way to express that in written text.”

She decided to exchange her pen and tape recorder for a film camera.

Park began using a film camera in 1985 and shot about 50 hours of interviews and other footage on 16-millimeter film through 1991.

They contain interviews with more than 100 people, including Koreans who got caught up in the Battle of Okinawa and former Japanese soldiers who knew firsthand wartime front-line facilities where comfort women worked.

Only about 10 percent of all the footage was used in Park’s movies, with the remaining 90 percent never made public. Most of the interviewees have since died.

The films have deteriorated over the course of more than three decades. They were in danger of becoming unplayable unless something was done immediately.

Work started in August 2019 to restore the films at the initiative of Park’s daughter Ma-eui, a film producer. Her team of workers called for donations on a crowdfunding platform and met the goal of raising 5.6 million yen ($54,100), which allowed them to take an initial step toward digitization.

The process requires converting the video and audio parts both into digital form and bringing them together.

“The footage is filled with live voices and the suffering of first-generation Koreans who had to live through hard times,” said Ma-eui, 52. “We should not let them become buried in oblivion.”

Ma-eui and her colleagues plan to edit restored pieces of footage about Battleship Island and adapt them into a movie in 2021.

They will also continue organizing unpublished pieces of footage into works and archiving them in subsequent years.

“The han of first-generation Koreans, who were deprived of their nation (under Japan’s colonial rule), persists today,” Park said. “I believe it is my job to express their silence that has yet to take the shape of words.”

Shota Ogawa, an associate professor of cinema studies with the Nagoya University Graduate School of Humanities, said that cases abound in the world of the restoration of films containing oral testimonies.

He cited the example of Claude Lanzmann’s 220 hours of footage about the Holocaust by Nazi Germany, which is preserved at the U.S. Holocaust Memorial Museum after being restored over 20 years or so. Lanzmann is the director of “Shoah,” a super-long documentary film on the same subject.

“Park’s footage is historically significant in the broader context of being the records of emigrants, which goes far beyond the framework of ethnic Koreans in Japan,” Ogawa said.