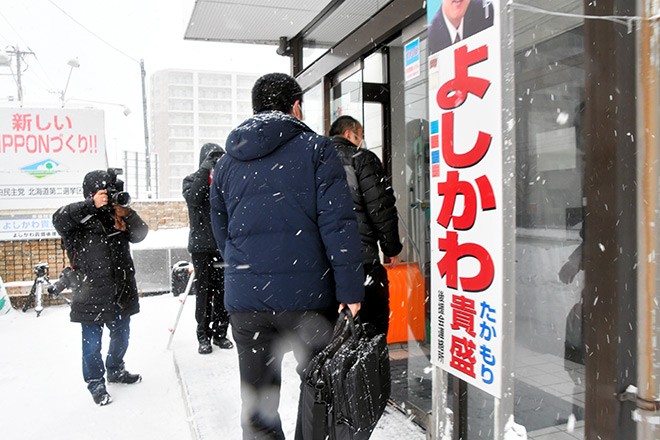 Tokyo prosecutors on Dec. 25 searched the office of former agriculture minister Takamori Yoshikawa in Sapporo after the veteran politician reversed course and admitted to receiving money from an egg industry official, sources said

Yoshikawa told prosecutors during voluntary questioning that he “was going to return the money,” according to the sources.

Prosecutors searched his office in the morning for evidence that as farm minister, he received 5 million yen ($48,275) from a top representative of Akita Foods Co., a major egg producing company based in Fukuyama, Hiroshima Prefecture, to do favors for the egg industry.

The representative, who is now 87 and has left the company post, has told prosecutors that he gave money to Yoshikawa “for the egg industry,” according to sources.

Yoshikawa was questioned on Dec. 21. Later that night, he signaled his intention to resign as a Lower House lawmaker because he has been receiving treatment for a chronic heart condition and will undergo a surgery soon.

The announcement apparently made prosecutors search Yoshikawa’s office before it could close because of his resignation.

Yoshikawa is believed to have received 2 million yen in November 2018 at a Tokyo hotel from the former company representative, as well as a total of 3 million yen over two meetings at Yoshikawa’s office as agriculture minister in March and August 2019.

The former company representative said he wanted Yoshikawa and the farm ministry to oppose an international organization’s proposal for animal welfare standards to reduce the stress of livestock, sources said.

Japan later objected to the proposed standards, which would have forced Japanese poultry farms to spend large sums on upgrades.

Yoshikawa had previously denied accepting any money from the company.