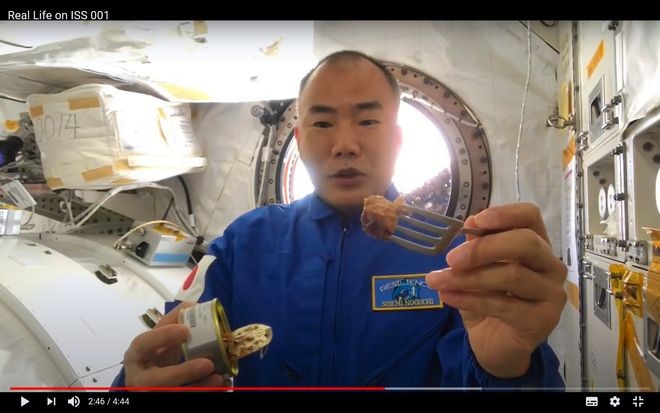 OBAMA, Fukui Prefecture--Japanese astronaut Soichi Noguchi sampled some canned mackerel aboard the International Space Station (ISS) and proclaimed it out of this world.

He rated the creation by Fukui Prefecture-run Wakasa High School as “exceptional” on his YouTube channel, thrilling children and teachers at the school who fulfilled their 14-year-long dream.

“I was relieved that Noguchi referred to the product as tasty,” said Sari Tsujimura, a second-year student involved in the project to put a suitable dish for an astronaut in space. “We will work hard to proceed with our research further."

The taste test was the culmination of more than a decade of research, experimentation and testing.

Titled “Real Life on ISS 001,” the video uploaded on Nov. 27 shows Noguchi explaining his activities aboard the ISS. In the middle of the video, he displays the mackerel can while saying that “many questions have poured in about food in space.”

“This one is especially noteworthy,” Noguchi says. “The canned mackerel was made by students at Wakasa High School in Fukui Prefecture.”

Noguchi continues, “Liquid content in ordinary canned products fly off, but this is really well designed so that will not happen. It is juicy and excellently flavored with soy sauce.”

Bringing a piece of mackerel into his mouth with a fork and then tossing another into the air in the gravity-free conditions for consumption, Noguchi praised the students’ brainchild as “delicious.”

Students had to navigate a difficult and long road to send their creation to space.

The effort began in 2006 when the canned mackerel manufacturing process at a training plant of a predecessor of Wakasa High School, the Obama fisheries high school, was recognized under the international HACCP standard for sanitation control.

The HACCP criterion was initially developed by NASA to make food that is safe for consumption by astronauts.

Students at the time learned about it and proposed they deliver their canned product to outer space. Yasuyuki Kosaka, 43, a biological resources teacher at the school, allowed children to do research in his classes.

“That was a great dream and working toward realizing it would be exciting,” Kosaka recalled thinking at the time.

They sought help from the Japan Aerospace Exploration Agency (JAXA), as a full-fledged project started. A lecture on space food was offered by JAXA at the school, and a JAXA official responsible for foodstuffs for astronauts tested a prototype.

A challenge was preventing the liquid seasoning from flying away or splattering in the no-gravity environment. Since such a condition cannot be prepared within the educational institute, project members took advantage of the JAXA’s know-how on cooking techniques to cater to gravity-less circumstances.

One of those technologies is adding to viscosity. Too sticky seasoning renders a bad feeling to the mouth, while too soft one could result in the liquid spreading in the air in the zero-gravity environment.

They repeatedly tried gelatin and other ingredients, and eventually decided to mix kudzu powder with the fluid seasoning at a rate of 9 percent so the mackerel’s taste would not be disturbed.

As faint flavors can't be detected in space, meals for astronauts need to be strongly flavored. The students also struggled to find the best flavor.

When astronaut Norishige Kanai, who stayed in the ISS for six months from late 2017, sampled the mackerel, the students were advised to “make the flavor resemble that of a homemade one.”

A myriad of hygiene and other criteria must be met to keep astronauts healthy, and documents submitted to the JAXA for certification for space food reportedly piled up more than 10 centimeters high.

The students’ research was passed down through 10 or so A4-size notebooks with a total of 300 children engaging in the program. In November 2018, the canned mackerel was granted Japanese-style space food status by JAXA.

Two years following the issuance of the certificate, Kosaka watched the video Noguchi shot from above the Earth and said he wanted to “shout hooray.”

“That reminded me of the faces of past students,” said a smiling Kosaka. “I have been telling students how important it is to work patiently to solve problems that arise from their own curiosity and interest.”

He stated that a continuous stream of messages of delight poured in from graduates.

“The mackerel can is full of wishes of many students,” Kosaka said.

Project members will continue working to further improve the convenience and taste of the space meal. Three second-year students, including Tsujimura, are comparing 30 to 40 types of mackerel canned food from across Japan to make their own softer and easier to eat with a spoon.