Ikenna Nweke, a Nigerian student studying in Japan, became famous in his home country after delivering a lost wallet to police. (Sotaro Hata) 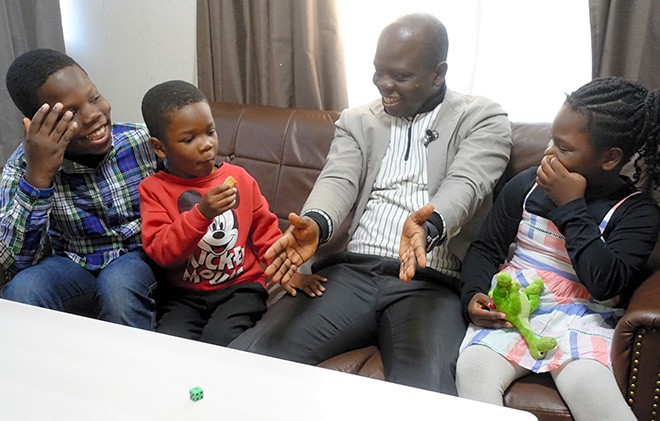 Ikenna Nweke plays with his children at his home in Tsukuba, Ibaraki Prefecture, in November. (Sotaro Hata)

TSUKUBA, Ibaraki Prefecture--Ikenna Nweke did what many people in Japan do when they find a lost wallet.

The Nigerian student handed it in to police. The next thing he knew, he made headline news, having received a commendation from the president of his home country.

Making use of his newfound celebrity status, Nweke, 38, is now campaigning to convey the importance of honesty to young Nigerians.

“I want (my action) to be considered normal in Nigeria,” said a bewildered Nweke, a doctoral student majoring in political science at the University of Tsukuba here.

He said he was inspired to do so by his upbringing at the hands of a strict father, now deceased.

Nweke was on his way home by bus from his university on the evening of June 19 and stopped off to buy kebabs for his wife Amara, 31.

He was walking up a stairway to reach a food stand near a bus stop around 7:20 p.m. when he came across the wallet containing notes and credit cards on a second-floor landing.

His heart went out to the owner who must have been distressed and immediately dropped off the wallet at a koban police box to the surprise of the officer on duty.

“He was surprised maybe because he didn’t expect a Nigerian to return something because of the bad image Nigeria had,” Nweke said.

Nweke’s childhood was marked by poverty. His family was so poor that it was not able to buy a pair of shoes for him when he was in grade school.

His father, Napoleon, was a truck pusher. A disciplinarian, he instilled a sense in his seven children that stealing was a crime and also admonished them to always be kind to others.

He died of overwork when Nweke was 11 years old. Just before his death, Napoleon tearfully pleaded with his wife to ensure that Nweke got a college education.

The young Nweke did part-time jobs to save money to go to college, but ran out of tuition funds and was forced to drop out after about 18 months.

In 2013, Nweke came to Japan on a scholarship from the Japanese government after working as a high school teacher and journalist.

He settled in Tsukuba, a city close to Tokyo that boasts lush green areas, a sizable non-Japanese community and a general openness toward foreign nationals.

At the University of Tsukuba, Nweke chose Boko Haram, a radical Islamic group blamed for a string of terror attacks in Nigeria, as his research theme.

Although he completed his master’s course, he is not eligible to receive a scholarship for his Ph.D. program.

Nweke, who lives with his wife and four children, 1 to 9, has to work part-time jobs as an assistant and English teacher to earn enough to live on.

Amara also works part-time at a shop selling hamburgers to help make up for a shortfall in his income due to the novel coronavirus pandemic.

There was a sizable amount of money inside the wallet, which Nweke could have used had he been unscrupulous.

Police said he would be entitled to a reward equivalent to 10 percent of the money under Japanese law. But true to the values instilled in him by his father, Nweke declined.

The kebab stand was already closed when Nweke left the koban after filling out forms. He went home and told Amara why he was late. She simply said she hoped the wallet would be returned to its owner quickly.

A few days later, Nweke received a letter from the police. When he asked a Japanese friend to read it for him, it turned out that police were asking for his permission to tell the owner his contact information so the owner could express gratitude for Nweke’s kindness.

Several days after that, he received a call from the owner to thank him and an invitation for him and his family to come over for dinner once the pandemic is brought under control. The owner also told Nweke to call for help should he ever need it.

Around that time, Nweke was anxious to find a way for Nigeria, a West African country with a population of 200 million, to be seen in a better light after a group of Nigerians was arrested in Dubai on suspicion of internet fraud.

Sensing an opportunity to show that not all Nigerians are untrustworthy, he posted the story about the lost wallet on Facebook.

Before he knew it, his post went viral on social media, and Nweke began receiving requests for online interviews from broadcasters and other outlets in Nigeria.

He eventually attracted the attention of Nigerian President Muhammadu Buhari, who praised his compatriot in an unusual statement for “projecting the values of honesty, integrity and contentment that should be the hallmark of a people.”

Still, Nweke was left confused by his newfound fame. He felt something was not quite right with a society that makes such a big deal out of a simple act of selflessness.

Hoping that turning in a lost wallet would be considered a natural response, Nweke established a foundation in his name in September to promote the importance of living with honesty and integrity among young people in Nigeria.

Ikenna Nweke Foundation Club, working with college students who have registered via the internet, is sharing his experience with junior and senior high school students and praising them for their good behavior.

Eighteen junior and senior high schools have joined the cause in Nigeria.

“There are people in Nigeria who use poverty and an underprivileged upbringing as excuses when they commit crimes. But that’s wrong,” Nweke said. “I lost my father at an early age, but I have made efforts to make a life for myself as a researcher in Japan. I want to give hope to children under the same circumstances as I experienced.”

Nweke is also writing a letter to his late father to tell him that he moved on to college and completed his master’s course and how he came to Japan and won respect in Nigeria.