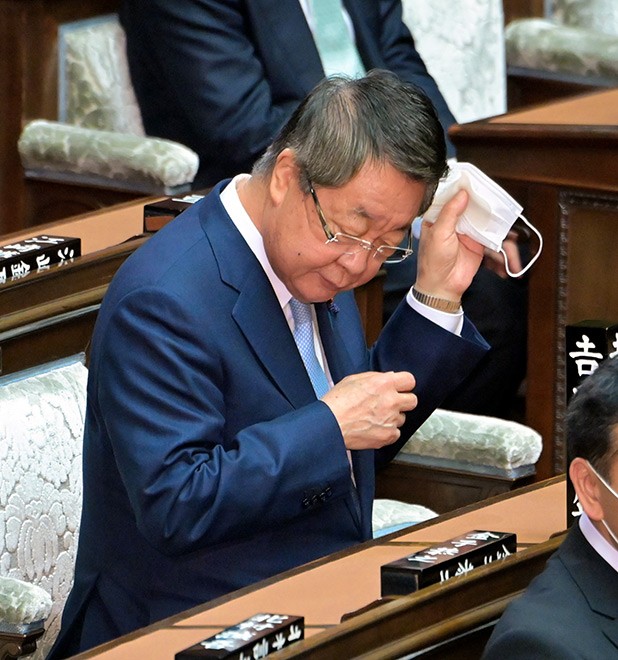 Takamori Yoshikawa attends a Diet session as a member of the Lower House on Nov. 20. About a month later, he resigned after a bribery scandal erupted. (Kotaro Ebara)

A former farm minister took 2 million yen ($19,300) from an egg producer in an alleged quid pro quo after offering testimony at a Diet session favorable to the Japanese egg industry, according to sources.

Tokyo prosecutors searched offices related to Takamori Yoshikawa on Dec. 25 on suspicion of taking bribes from Akita Foods Co., an egg producer in Hiroshima Prefecture, at the minister’s office and at a hotel, the sources said.

Yoshikawa, 70, a member of the ruling Liberal Democratic Party, resigned from the Lower House earlier this month after the scandal broke out.

The sources said that Yoshikawa accepted the cash from the egg producer, which was lobbying for the government's help in shooting down an international group's effort to improve the conditions for chickens kept on poultry farms.

A total of 5 million yen was handed to Yoshikawa in 2018 and 2019 by the then top official with Akita Foods who also was a ranking member of the industry group, the sources said.

Yoshikawa, who represented a constituency in Hokkaido, served as agriculture minister between October 2018 and September 2019 under the Abe administration.

In September 2018, an international organization proposed reducing stress on chickens being raised based on a concept promoting animal welfare. The proposal was critical of many Japanese egg producers’ raising of chickens in cages.

Yoshikawa received a petition opposing the international proposal when he met the Akita Foods official and other officials at his office in the ministry building on Nov. 12, 2018, according to the sources.

Nine days later, the minister said his ministry would promote animal welfare while seeking understanding from the egg industry when he was asked about Japan’s stance on the proposal during a Lower House committee on agriculture, forestry and fisheries.

Yoshikawa accepted the 2 million yen from the Akita Foods official at a Tokyo hotel that night, the sources said.

The official requested that the government not accept the international organization's proposal, which would require major renovation work to expand space at poultry farms.

The government presented an opinion opposing the animal welfare standards in January 2019, leading to a review of the proposal.

Yoshikawa is suspected of having received 3 million yen more from the Akita Foods official at the minister’s office in March and August in 2019. The official, 87, resigned in August this year as a representative of the company.

Akita Foods also faces allegations of avoiding listing the purchase of 3 million yen in tickets to Yoshikawa’s fund-raising party in 2019 in his political group's income and expenditure report on political funds by falsifying details of the transaction.