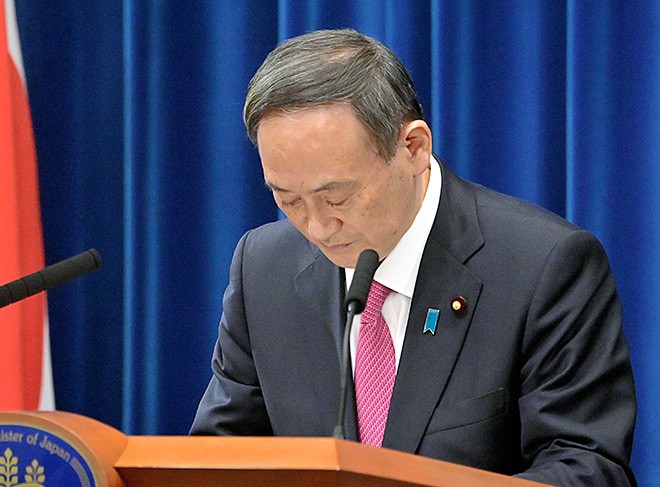 Among the candidates that failed to make the list was “Toki wo modoso” (Let’s turn the clock back), a line popularized by the “manzai” comic duo Pekopa.

To explain for the benefit of people who are not familiar with the background, the expression is uttered when a situation has taken a wrong turn and you want to go back to square one.

Come to think of it, I can immediately name some politicians who would wish to say that.

He faced the embarrassment of having to start a news conference to urge the public to refrain from eating out in large groups by apologizing for his own conduct.

Suga may have wished he had skipped the party at the risk of being discourteous to his host, but such a thought would have been crying over spilt milk.

I wonder if those who attended succeeded in having a “quiet, masked dinner party,” something that the prime minister himself had called for.

Regarding questions about how payments were made for banquets on the eve of annual cherry blossom viewing parties while Shinzo Abe was prime minister, it has come to light that Abe’s side had been partially bankrolling them.

But the former prime minister explained that he knew nothing because he had been lied to by his top aide.

Conceding that he should have suspected something was amiss, Abe said, “If only I had questioned my aide on the premise that the fee of 5,000 yen ($48) per guest could not have covered the banquet costs ...”

Obviously, he did not expect anyone to remind him of the repeated challenges made against him in the Diet that those fancy hotel dinner parties must have cost far more than 5,000 yen per person.

As for opposition parties, members of the former Democratic Party ultimately came together again, which was effectively tantamount to undoing, in a manner of speaking, their act of spilling milk three years ago.

I can almost hear the members ruing their past decision.

Pekopa are known for their kind, or non-accusatory, take on situations that would be brutally mocked among other manzai standup duos.

I wonder if they would say, “No, (Abe) does not have to doubt his aide’s words. There’s always a place for a politician with a guileless heart.”

Well, no. Even Pekopa would never say that.