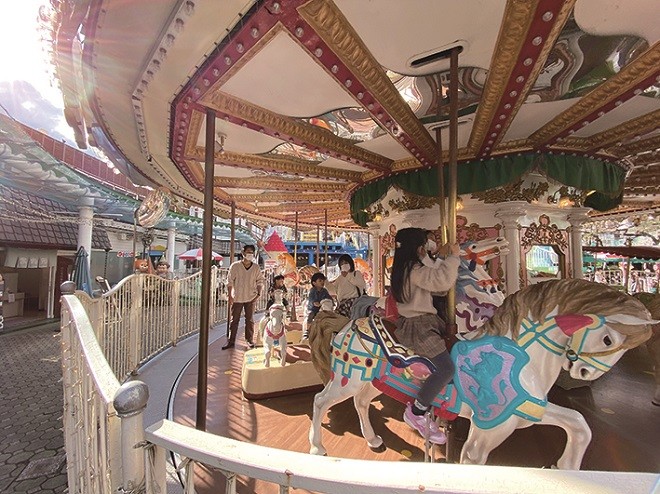 The roller coaster inches upward. Your back seems pasted to the backrest as you slowly go up, up, up. Your heart rate quickens in anticipation. Then, silence. It stops for a short, suspenseful moment.

You take a deep breath for what is to come, and whoooooosh! At the top of your lungs, with every gravitational pull and curve, you scream, "Ahhhhh! Wheeeeee! Woohoo!"

Adding to the thrill is knowing that you’ve entrusted your life to Japan’s oldest steel-track roller coaster, built in 1953. Oh, and let me add that the manufacturer of the park’s roller coaster went bankrupt in the early 2000s due to a lawsuit by Knott’s Berry Farm, an American theme park, for mechanical problems on a ride that required extensive maintenance and repairs.

Sorry, I don’t mean to scare anybody. It’s 100-percent safe, and the park’s track record proves it. There has never been an accident with any of their rides.

Hanayashiki, located close to the famous Sensoji temple in Asakusa, opened in 1853 as a botanical garden. The main draw was tree peonies and chrysanthemum works--"kikuzaiku," which entails shaping chrysanthemums with bonsai techniques, or creating people or animal shapes called "kiku ningyo."

Personally, I find these dolls weird, but I guess that just shows how uncultured I am. Anyway, that’s why the place is called Hanayashiki, a mansion of flowers.

Back then, "ohanami" flower-viewing in many forms was big-time amusement. Ahh, the days when people enjoyed the simple pleasures of life. What has happened to humanity? Today, popular amusement park activities involve engaging in activities that run counterintuitive to natural selection!

In the Meiji Era (1868-1912), Hanayashiki added rides. By the early Showa Era (1926-1989), it had established a famous and popular zoo inside the park. People flocked to see quintuplet tigers born at the zoo and the nation’s first baby lion.

It was a hopping place until the Great Kanto Earthquake in 1923. Fires broke out, and many animals died in their cages. Among the rides, haunted house, theater, game plaza, photo booths and all the other attractions is a stone marker, “The Memorial of Birds and Animals.”

Unlike mega-chain parks such as Disney and Universal, which center around a theme, Hanayashiki has a bit of everything. It’s kitsch in a fantastically Japanese way. I saw a floating Amabie, the pandemic-fighting mermaid-like sprite, or yokai, from on the red bridge over a tiny pond.

May Hanayashiki link the past, present, this world and other realms forevermore!

(Hanayashiki's operating hours can be seen on its web site at https://www.hanayashiki.net/businesshours) (in Japanese)

This article by Lisa Vogt, a Washington-born and Tokyo-based photographer, originally appeared in the Dec. 20 issue of Asahi Weekly. It is part of the series "Lisa’s In and Around Tokyo," which depicts the capital and its surroundings through the perspective of the author, a professor at Meiji University.