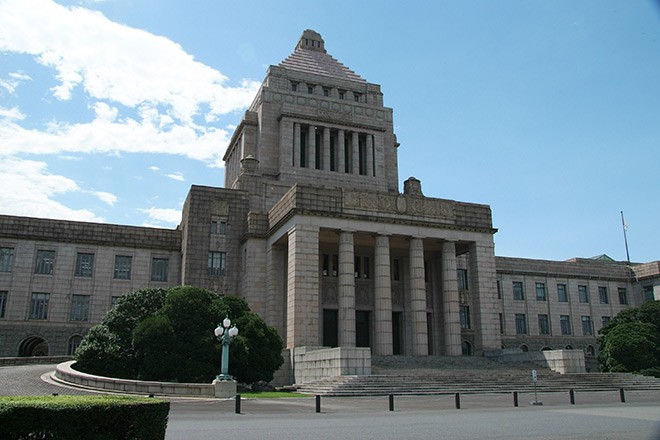 The growing health crisis led to a rare agreement between the ruling coalition and opposition camp to start immediate Diet deliberations on revising the special measures law for dealing with the COVID-19 pandemic.

Normally, such legislation is discussed in April, after the budget proposal for the coming fiscal year is approved by the Diet.

But on Dec. 28, Hiroshi Moriyama, the Diet Affairs Committee chairman of the ruling Liberal Democratic Party, and Jun Azumi, his counterpart in the opposition Constitutional Democratic Party of Japan, agreed that discussions on revising the special measures law should start almost as soon as the ordinary Diet session convenes on Jan. 18.

Azumi told Moriyama that the opposition was willing to deliberate the budget in parallel with the revision bill.

The ruling coalition wants to pass the revision bill before the end of January after gaining the opposition’s backing of support measures to help businesses that comply with local government requests to shorten business hours or temporarily close their doors.

Moriyama and Azumi also agreed to hold a meeting on either Jan. 5 or 6 to give both sides the opportunity to express their views on the revisions to government officials.

“We would miss the right timing if we stuck to established practice and waited until after April once the budget was passed” to deliberate revising the special measures law, Azumi told reporters after his meeting with Moriyama.

Government officials are considering writing into the special measures law various support measures for the cooperating businesses, as well as penalties against businesses that refuse requests from prefectural governors to temporarily close or shorten operating hours.

Azumi, however, expressed some hesitation about including punishments for noncompliance.

“There is no need for strong penalties,” he said. “I believe the fundamental way of thinking should be to encourage (cooperation) by providing sufficient support measures.”

A number of governors around Japan have urged businesses that serve alcohol to close up early as the surge in novel coronavirus infections is straining medical facilities, particularly in densely populated areas, like Tokyo.

Prime Minister Yoshihide Suga on Dec. 28 again called on the public to take various measures to prevent a further spreading of COVID-19, saying at a government task force meeting that the “virus will not take time off during the year-end and New Year period.”

Suga also announced a temporary suspension of eased entry restrictions for medium- and long-term foreign visitors from all nations.

He said efforts would be made to allow for around-the-clock testing for COVID-19 as well as medical care throughout the year-end and New Year period.

The prime minister’s office on Dec. 28 decided to postpone Suga’s planned Jan. 4 visit to Ise Jingu shrine in Mie Prefecture. The visit will be rescheduled depending on the COVID-19 situation.