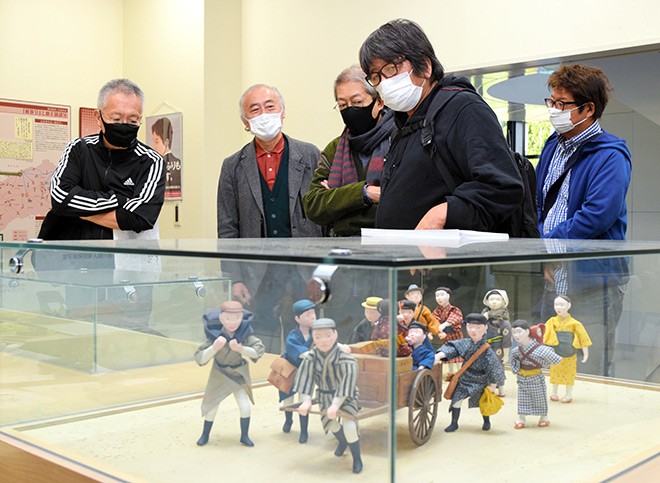 Tatsuya Mori, second from right, and others learn about the lives of itinerant peddlers in the Kagawa prefectural government’s exhibition room for human rights education in Marugame, Kagawa Prefecture, in November. (Setsuko Tachikawa)

MITOYO, Kagawa Prefecture--Famed documentary film director Tatsuya Mori’s next project is a photodrama, his first, based on the true story of Japanese peddlers brutally killed amid social turmoil following the 1923 Great Kanto Earthquake.

The slayings of the nine itinerant traders occurred in Chiba Prefecture east of Tokyo on the sidelines of a massacre of Koreans based on unfounded rumors they were going on a looting and arson spree as the capital went up in flames.

The victims were members of the “buraku” community, descendants of feudal-era outcasts who faced deep-rooted discrimination, from Kagawa Prefecture on the island of Shikoku.

Mori, 64, plans to release the film on the Fukuda village incident, as the tragedy is known, in 2023, on the centenary of the earthquake disaster that claimed an estimated 105,000 lives.

In November, Mori visited Mitoyo, Kagawa Prefecture, the hometown of the vendors, with 71-year-old scenarist Toshimichi Saeki to conduct research and interviews ahead of writing a script for the film.

A 76-year-old woman told Mori and Saeki about Haruyoshi Omae, her deceased father-in-law, who survived the attack.

“He would wail and scream when he had a drink,” she said. “He was probably recalling how fellow members of his party were killed before his eyes.”

Omae was just 13 years old when he was attacked. He gave his first testimony to members of a private study group in 1986, more than half a century after the tragedy. He had never uttered a word about the incident, even to his family.

According to accounts of survivors and other sources, the group of peddlers, who were selling medicine, consisted of 15 members, including family members.

On Sept. 6, 1923, five days after the earthquake, the party’s leader got into a quarrel with a waterman at a ferry crossing on the bank of the Tonegawa river in the village of Fukuda, now part of Noda.

Members of a neighborhood watch from Fukuda and the neighboring village of Tanaka, now part of Kashiwa, came rushing to the site.

Some in the crowd argued that the itinerants could be Koreans because their speech sounded different. Others said they must be Japanese.

One of the vigilantes slashed at a peddler with a fireman’s ax equipped with a sharp-edged hook while another opened fire with a hunting rifle. Nine of the peddlers, including a 2-year-old and a pregnant woman, were killed.

Eight of the vigilantes were found guilty. One accepted a suspended prison sentence. The remaining seven were imprisoned for rioting and murder but were freed under an amnesty following the death of Emperor Taisho in 1926.

Mori learned of the incident from a newspaper article he read 20 or so years ago. He was astonished that an incident of such brutality had long remained hushed up. He made the rounds of TV producers with a proposal to feature it in a special program, but in vain.

The producers shunned the proposal on grounds of sensitivity because the incident involved discrimination against Koreans and buraku people, Mori said.

In recent years, Mori has been alarmed by a number of developments that convinced him the incident merited coverage through a docudrama.

In 2017, Tokyo Governor Yuriko Koike ended the tradition of sending a eulogy for annual memorial services for the Koreans massacred in the aftermath of the Great Kanto Earthquake. She has cited “various viewpoints” on the issue.

Her decision came amid growing arguments, mostly in cyberspace, that deny wartime atrocities such as the Nanking Massacre of 1937 and issues like “comfort women,” who were forced to provide sex for Japanese soldiers during World War II.

Since last year, with the novel coronavirus pandemic raging, society has been rife with discriminatory and exclusivist behavior with regard to COVID-19 cases.

“The Fukuda village incident shows how easily and dangerously a crowd of people could end up killing others if they were influenced by unfounded rumors during emergency situations,” he said. “Both the assailants and the victims were Japanese. I want to delve into what separated their fates.”

Mori said he wanted to carefully portray why and how the slayings took place “so we will not repeat the same mistake, precisely because we are living in a time like this.”

Mori has worked on a number of documentary films, including “A” (1998), which is themed on the Aum Shinrikyo doomsday cult responsible for the 1995 sarin gas attack on the Tokyo subway system and other crimes.

Still, he said he has always wanted to shoot a photodrama.

This year, Mori plans to work on a draft script, cast the main characters and start raising funds for the project through a crowdfunding platform.

The Fukuda village incident remained largely unknown until a high school teacher and others from Kagawa Prefecture recorded the testimonies of the survivors in 1986.

Members of human rights groups and others from Chiba and Kagawa prefectures also began examining the case in 2000. A memorial monument was erected near the incident site in 2003.

The study attributed the incident to compounding factors, including discrimination against Koreans, prejudice against peddlers, exclusivism against outsiders and mob psychology.