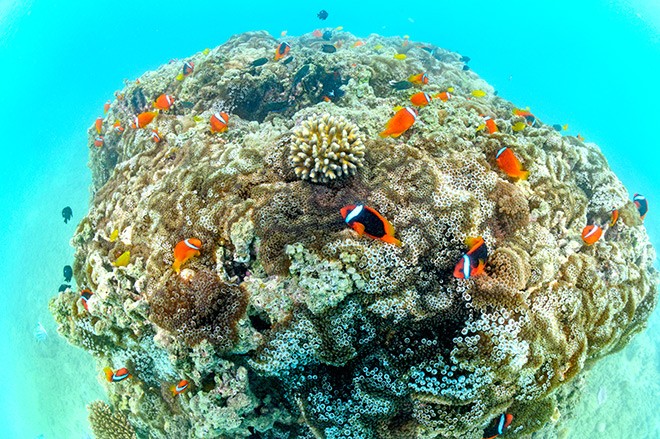 A sea anemone-covered rock known as “the castle of anemone fish,” which offers a habitat for tomato clownfish, is photographed off Nago, Okinawa Prefecture, in November. (Provided by Takuya Nakamura)

Photographer Takuya Nakamura is worried that a growing U.S. military project will transform an undersea cradle of life at his favorite location.

For nearly two decades, Nakamura, 45, has visited Oura Bay off the Henoko district of Nago, Okinawa Prefecture, multiple times a year to record its abundant nature.

The area is home to more than 5,000 species, including blue coral, sea turtles and tomato clownfish.

“Interactions between forests and seas form a great cradle of life,” the Tokyo-based underwater photographer said about the bay. “It is a bay with a condensed ecosystem.”

From Nov. 21 through 23, Nakamura shot images at four locations in Oura Bay near the relocation site for the U.S. Marine Corps Air Station Futenma now in Ginowan, also in Okinawa Prefecture.

Concerns are growing that the relocation project could destroy the local ecology. The pouring of earth and sand into the area off Henoko started in December 2018. The reclamation work for the new base is also expected to begin on the Oura Bay side.

At a distance from the relocation site, Nakamura took pictures of a sea anemone-covered round rock known as “the castle of anemone fish.”

Vividly orange tomato clownfish inhabit the 2-meter-tall rock, which is 4 meters in diameter.

Nakamura said about 50 of the fish were around there when he was taking images of the castle.

An apparently newly formed coral on the upper part of the rock was not there a year earlier, giving Nakamura the feeling that the “sea is living.”

In an area across from Henoko, Nakamura confirmed a rare blue coral colony growing in good condition. The colony measures 50 meters by 30 meters and stands 12 meters high like a towering mountain range.

Nakamura nicknamed it the “guardian of Oura Bay,” and never forgets to greet the corals every time he dives in the bay.

On shore, demonstrations continue against the reclamation work. However, the central government has shown no signs of halting the base relocation project.

Nakamura believes that the impact of the project on the ecosystem will emerge over years. He is also worried that the base project will spread the mood of resignation that Oura Bay “has died.”

“It took living creatures thousands of years to create this ecosystem,” he said. “I will work to make as many people as possible think about the ocean so Oura Bay will be preserved as it is now.”

Hailing from Tokyo, Nakamura was 10 years old when he first dived off the Kerama Islands in Okinawa Prefecture with his underwater photographer father.

Although he was not good at sports because of asthma, the diving experience gave Nakamura the confidence to pursue his dream of working also as an underwater photographer.

In 2001, Nakamura moved to Okinawa. He became interested in waters off Henoko when news report named the district a candidate site for the Futenma base’s relocation.

He explored the waters off Henoko and quickly became enamored by the rich ecosystem. Even after returning to Tokyo, Nakamura comes to Oura Bay twice or three times annually.