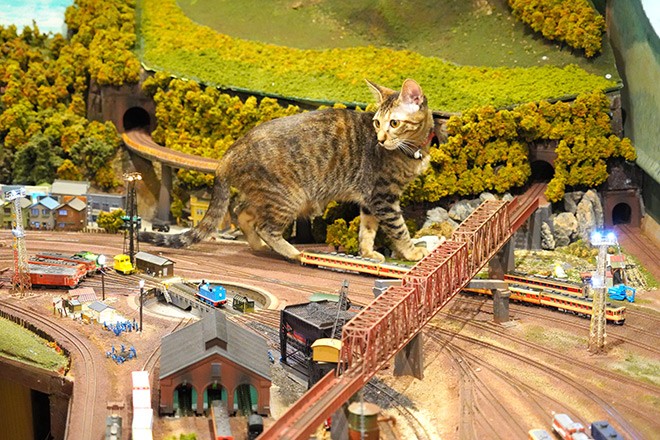 OSAKA--Take some stray cats and let them loose on your treasured model railway set. What might you expect?

Not so for Naoki Teraoka, who credits his decision to let kittens run amok on a miniature railway for saving a restaurant here after videos of their escapades went viral online.

Diorama Restaurant Tetsudokan, where a faithfully reproduced railway diorama sits at the center, was forced to close from March to September due to the novel coronavirus pandemic. The managers even considered shutting down the diner for good.

Before the restaurant reopened, Teraoka uploaded images of kittens stomping on trains and knocking over lights and station platform roofs. Railway buffs and other customers have returned thanks to the popularity of playful cats.

“I thought I rescued the cats, but it turns out they rescued me,” said Teraoka, 56, who serves as adviser to the restaurant.

Teraoka adopted a kitten about the size of his palm in June after a day care center nearby found the stray that appeared to be a newborn. He thought it looked like an “eggplant.”

He was taken by how cute the kitten looked and named it Simba after the protagonist in the musical “The Lion King.”

Another cat began showing up around Tetsudokan shortly after, apparently to see Simba.

Three other kittens were found near the restaurant in July. They appeared to be Simba’s siblings because the patterns on their fur and other features resembled Simba.

Tetsudokan started taking care of the mother and her three kittens with the help of a group that protects stray cats. The staff said “it would be a shame to split up the family.” Simba is kept at Teraoka’s home.

Tetsudokan, which primarily serves lunch and coffee, displays a large N gauge scale railway diorama, which is set in a regional city during the period of Japan’s postwar rapid economic growth. Customers are able to run their own miniature trains in the diorama.

One day in September, Teraoka let the kittens roam around as they pleased. He was unable to bear keeping them in narrow cages all the time.

Just as some of the diner’s staff had predicted, the cats didn’t hesitate to walk over railway tracks and damage diorama fixtures.

Teraoka, who opened his first restaurant with a railway model more than 10 years ago, previously couldn’t forgive anyone found treating his diorama roughly.

But he somehow wasn’t annoyed by the sight of the kittens energetically romping all over it and stopped “sweating the small stuff so they can behave as freely as possible.”

When he shared videos of the cats playing with the model on social media, the posts generated a far greater response than he anticipated. The cats’ antics have become a hit with all sorts of people, not just those really into railways.

Up to dozens of customers drop in on weekends.

The cats are kept in cages during the diner’s opening hours to enable patrons to enjoy the diorama.

Once the doors close for the day, filming time begins as the cats are released to do as they please with the model.

The kittens are growing bigger. To enable the model to support their increasing weight, Tetsudokan now conducts maintenance twice a week and is replacing parts with sturdier ones.