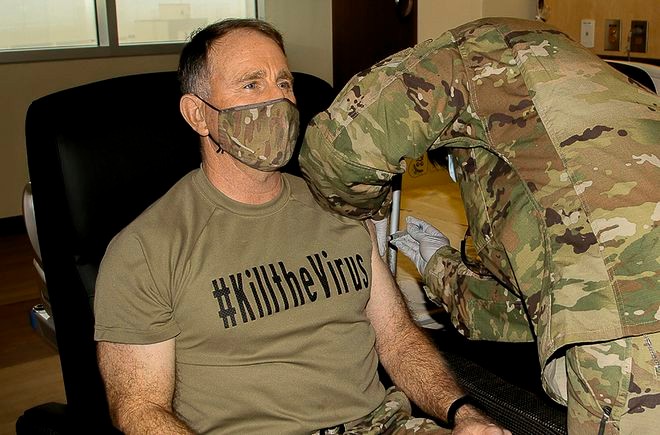 The United States has also started vaccinating its troops based in South Korea, as its Asian ally reported its highest daily COVID-19 fatalities amid surging cases in the country.

The United States Forces Korea says in a statement it started inoculating military and civilian health-care workers, first responders and the USFK command team with the Moderna vaccine on Tuesday.

Among those who received the vaccinations was Gen. Robert B. Abrams, chief of the 28,500 American troops in South Korea.

It says the vaccine is 100% voluntary and not mandatory. Abrams says that “I strongly encourage all eligible individuals to receive the vaccine.”

The USFK statement says more vaccines from Moderna, and potentially others with FDA approval, will be sent to the USFK.

The U.S. troops’ deployment is meant to deter potential aggression from North Korea. Abrams says the COVID-19 vaccine “is another tool that will help USFK maintain a robust combined defensive posture."

South Korean government has faced domestic criticism that it has been too slow in working out vaccine procurement plans. The government said Tuesday it will have vaccines for 56 million people, an amount seemingly enough for the country’s 51 million people. Officials say they plan to begin inoculating the South Korean public in February.

The 40 deaths are the nation's highest daily toll, which has been attributed to clusters in nursing homes and similar care facilities with elderly or otherwise vulnerable residents. Officials say 28 of the newly reported 40 deaths happened at such facilities.