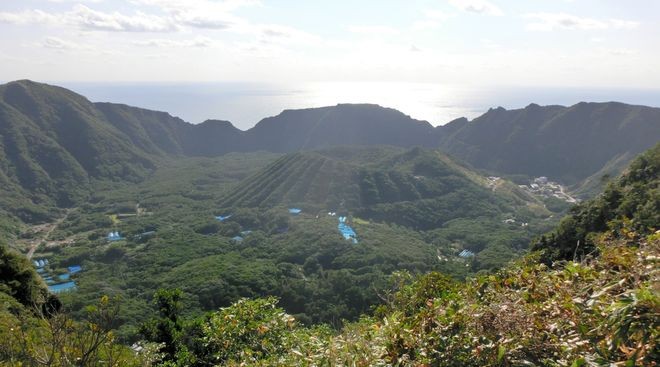 Isolated Aogashima island, which lies in the Pacific Ocean about 360 kilometers south of the capital, is fighting what some regard as a losing battle to stop depopulation.

The island boasts stunning scenery and unspoiled waters. Its main revenue earners are from tourism and salt production.

Given that the only way to reach Aogashima is by aircraft and ferry, it takes a determined effort to get there.

Aogashima village is now trying to cash in on the island's rich natural surroundings to attract sightseers and those wanting to settle.

“The sheer inconvenience of the island means that its rare abundant nature could be preserved,” said Hiroshi Sasaki, 76, who served three terms as Aogashima mayor until 2001 and now runs a tourist inn. “Many people find solace and encouragement here.”

Village officials, teachers and other civil service workers, along with their families, account for about half of the population. Many workers come from areas outside the island but stay only temporarily.

The village office continually suffers from a labor crunch. Although the municipality is soliciting new staff for next fiscal year, only a few applicants have emerged, according to Aogashima representatives.

As there traditionally are no highly productive industries on Aogashima, construction workers are mainly engaged in public works projects.

According to an estimate by the National Institute of Population and Social Security Research, Aogashima’s population will fall to 104 in 25 years.

“The municipality may not be able to retain its community,” said Toshiyuki Kikuchi, 61, who serves as Aogashima village assembly chairman. “We can only call for public works projects as long as a certain number of people reside here.”

Arisa Yamada, 58, president of Aogashima Salt Factory Co., is scrambling to create a local specialty under the brand name of Hingya no Shio. The firm crystallizes pumped seawater from the Kuroshio current off Japan, taking advantage of terrestrial heat from the Hingya volcanic fumarole.

The product takes two weeks to be finished and is touted as “finely treated salt in which considerable time and labor are invested.”

Order numbers started surging four or so years ago, so Aogashima Salt Factory occasionally hires temporary workers to make up for a personnel shortage.

Mikiya Tanaka, 22, a college student from Kita-Kyushu, abandoned his plan to study in China when the novel coronavirus pandemic started and decided to work at the company for four months until next spring to “obtain precious experience one can take only here.”

It is rare for so young a person to come to Aogashima to work.

One possible sign of hope is that Aogashima’s double caldera structure is being put on the global spotlight.

The geological feature was included by a U.S. nongovernmental organization in 2014 in its list of the world's 13 most breathtaking sights. Aogashima was the only Japanese destination on the list.

The U.S.-based Smithsonian Institution in 2016 described Aogashima as “a sleepy Japanese town built inside an active volcano” on its affiliated website, leading to an influx of visitors.

As there are few street lights in Aogashima, many people come to Aogashima for stargazing as well.

“We should be able to maintain the municipality just through tourism promotion,” said Sasaki. “Residents need to help each other and propose ideas together.”