WATERSHED WEEKS: Why Tokyo trod lightly in way it chided China over Tiananmen 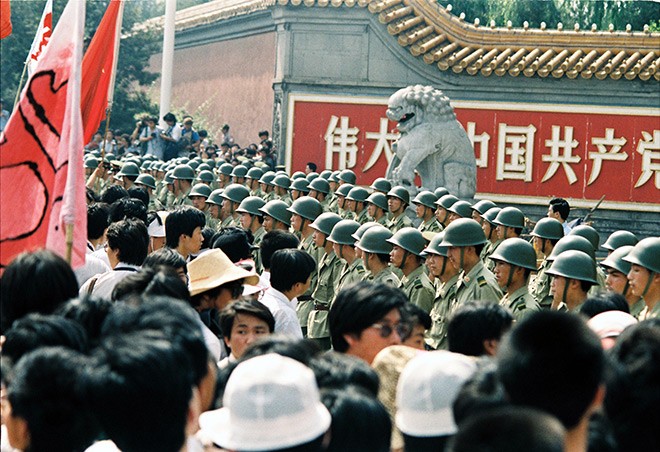 Chinese citizens stage a protest over the bloody crackdown in Tiananmen Square in front of the Xinhuamen Gate at Zhongnanhai in Beijing, close to the site where so many were killed on June 4, 1989. (Asahi Shimbun file photo)

Editor's note: This is the first of a two-part series describing what happened in backdoor negotiations right after the Tiananmen Square crackdown, based on documents declassified by the Japanese government in late December.

Japan, fearful of isolating China if it criticized Beijing for its bloody 1989 crackdown on Tiananmen Square student protesters, tried its level best not to join the chorus of global condemnation that greeted the watershed incident.

There was too much at stake.

A note penned by Japanese Ambassador Toshijiro Nakajima on June 13, 1989, nine days after the incident widely portrayed as a massacre, explains that Japanese Embassy staff in Beijing headed by bus for a downtown area where roads were still blockaded by the Chinese military.

The handwritten report on the “embassy’s rescue activity of Japanese citizens” was addressed to the foreign minister.

The embassy was scrambling to evacuate 1,500 Japanese nationals unable to flee by themselves to airports and elsewhere. Its plan was to use chartered buses, starting on June 5.

The documents describe the situation at the time as “dangerous because gunfire can be heard continuously at the embassy.” It likened the rescue operation to “sending personnel to a battlefield.”

“I could only pray that they (embassy staff) would return safely,” Nakajima writes.

The protests were precipitated by the death of pro-reform Communist Party General Secretary Hu Yaobang that April. Students began massing in Tiananmen Square to call for democracy. The massive demonstration was timed to coincide with a memorial service for Hu.

The party’s leadership viewed the activity as “a disturbance” and mobilized the military to crack down on the demonstrators from the night of June 3 through the early hours of June 4.

Chinese authorities later announced that 319 individuals were killed. However, the death toll is widely presumed to have been much higher.

The Japanese government called the deaths “really regrettable” and began working on its official response to the incident in preparation for the Group of Seven summit meeting scheduled for mid-July.

A series of documents themed on the Tiananmen Square Incident detail the process.

Outlining “our nation’s future policy toward China,” a document dated June 15 as “briefing material for the prime minister” for use by the administrative vice minister with the Foreign Ministry criticized Beijing for resorting to force against the students.

It called the deployment of troops “unacceptable from the perspective of humanity,” but referred to the incident as “a domestic matter in China, where the political and social system is different.”

It noted that it “will not be good to drive it (China) toward isolation from a broad perspective.”

The document reflects the Foreign Ministry’s concern that strong anti-Japan sentiment might flare in China if Tokyo explicitly made an issue of human rights in light of its own military aggression in China in the leadup to and during World War II.

Citing issues of “a perception of history,” “Yasukuni Shrine,” and “textbooks,” the report notes that the “past activities of our nation should not be rendered blurred even though China took an inhumane action.”

The 1980s was a period of great turmoil in bilateral relations due to visits by the prime minister to war-related Yasukuni Shrine in Tokyo and China's anger at the historical content of textbooks used by Japanese students.

According to the newly declassified material, Tokyo took the position that it would be ideal if China retained “its reform and open-door policy for our nation.”

Any suggestion of suspending or stopping economic cooperation was deemed as “exerting a huge impact and being unexplainable.”

In August, a year before the crackdown, Prime Minister Noboru Takeshita pledged to offer the third round of yen loans in Japan’s official development assistance program during his visit to China.

One problem facing Tokyo was that the Tiananmen Square Incident inevitably would be the main agenda item at the G-7 summit from the standpoint of human rights.

European participant nations were all critical of Beijing. The U.S. Congress submitted a succession of draft laws and resolutions to impose economic sanctions.

With that in mind, a further refined version on “our nation’s future policy toward China” was compiled on June 22, arguing that Tokyo should “take steps to minimize the impact of the event as much as possible.”

The document states the government should simply “keep a close watch on the situation until the summit, and gradually normalize the relationship after confirming that the Chinese side will maintain its course of reforms and openness.”

While the third round of loans was expected to be frozen in late June, the document warned Tokyo “not to use such expressions as ‘a fundamental review’ out of consideration for Beijing.

It concludes, “The stance of watching the situation should be kept until the summit.”

To win the understanding of the United States and Europe and prevent Beijing from being isolated in the world community, Tokyo then started gearing up for a preparatory session by bureaucrats for the so-called Summit of the Arch.

The meeting took place in suburban Paris to mark the 200th anniversary of the French Revolution.

Relative of virus victim asks to meet WHO experts in Wuhan

VOX POPULI: Pandemic health 101: Stop getting drunk so much to kill the pain