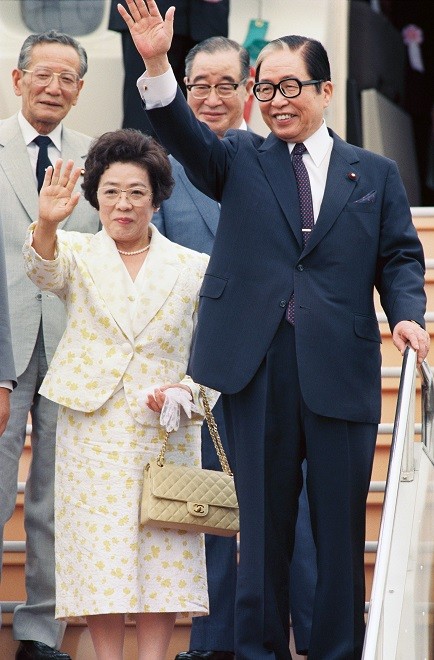 Prime Minister Sosuke Uno departs with his wife from Tokyo's Haneda Airport to attend the Summit of the Arch in France on July 12, 1989. (Asahi Shimbun file photo)

Editor's note: This is the last part of a two-part series describing what happened in backdoor negotiations right after the Tiananmen Square crackdown, based on documents declassified by the Japanese government in late December.

Crafty maneuvering by a Japanese politician with backing from Washington led to much milder international condemnation of China's Tiananmen Square crackdown than was initially envisaged, declassified documents show.

Discussions between Japan, European nations and the United States at the 1989 Group of Seven summit over how to respond to the incident that claimed hundreds, if not thousands, of lives are detailed in three files of documents titled “The Tiananmen Square Incident (The Summit of the Arch).”

The so-called Summit of the Arch was organized a month after the watershed event.

On July 7, Sherpa aides to political leaders from participating nations gathered in France for preliminary talks.

The Japanese side, which included Deputy Foreign Minister Michihiko Kunihiro, insisted no special declaration targeting China should be issued, while the other nations were pushing for a strongly worded statement.

The discussions started at the request of the host state, France, to decide how harshly to condemn China’s conduct in view of its gross violation of human rights.

Tokyo objected to specifying sanctions already taken by each member country, such as suspending ministerial-level meetings and weapons trades, and called for those steps to be put in parentheses to weaken the tone of the document.

This request drew criticism from Italy, which argued that retaining parentheses would trigger global accusation over Japan’s weak-kneed stance.

On July 11, three days before the summit, Kunihiro was briefed in Paris by a senior Foreign Ministry official in Tokyo on how to present Japan's position on the issue to the other countries represented at the summit.

The official told him that “strong determination” was shown to achieve “an even better-balanced expression that will be indispensable to maintaining a good relationship with China in the event global leaders decide to remove the parentheses.”

This was in reference to Prime Minister Sosuke Uno's position that he expressed during a meeting with the Foreign Ministry.

Kunihiro was duly ordered to include the sentence, “It is not our intention to isolate China,” in the declaration.

When Kunihiro informed Jacques Attali, a French Sherpa who served as a presidential counselor, about Japan’s plan that day, Attali expressed disapproval, stating it would significantly weaken the tone.

The U.S. Sherpa also agreed with Attali, noting that European states felt that Japan was deliberately taking a less severe stand so as to protect its economic relationship with China, and that, in particular, Attali was one who stood by this position.

On July 14, the start of the summit, Uno showed his hand.

Listening to Attali point out during the lunch meeting that European nations deemed it unproductive to argue that China should not be isolated, Uno suggested an alternative: encourage Beijing to continue its reformist policies to prevent it from becoming isolated.

The expression was not asking other summit member countries to refrain from isolating China. Instead, it was intended to urge China not to isolate itself. Attali greeted the proposal as cleverly worded and non-problematic.

Uno had served as the Diet Affairs Committee chairman of the ruling Liberal Democratic Party, a position that pitted him against opposition parties in verbal sparring. He craftily added that China must have been fearfully monitoring developments at the summit.

The declaration, adopted on July 15 at the plenary summit meeting, stated as Uno had proposed, “We look to the Chinese authorities to create conditions which will avoid their isolation and provide for a return to cooperation.”

This diplomatic victory was due partly to U.S. President George H.W. Bush, who helped the Japanese side from behind the scenes.

Bush, who became head of the U.S. liaison office in Beijing before the normalization of the U.S.-China relationship, had a keen insight into China's mind-set. He was also careful to ensure that relations between Japan, the United States and Europe would not be jeopardized toward the end of the Cold War.

When Bush met six weeks later with Japanese Prime Minister Toshiki Kaifu, who had replaced Uno as prime minister, in early September, he stated that good relations with China were vital for the United States, Japan and Europe. He described Beijing as geopolitically and strategically important.

Following the Japan-U.S. meeting, a U.S. Department of State official explained how Bush worked to lay the groundwork for the Japanese diplomat at the G-7 summit.

The U.S. president, according to the accounts, believed that any attempt to isolate Japan had to be avoided. This was coupled with his innate understanding of China’s situation. That led to the revised draft declaration and milder tone.