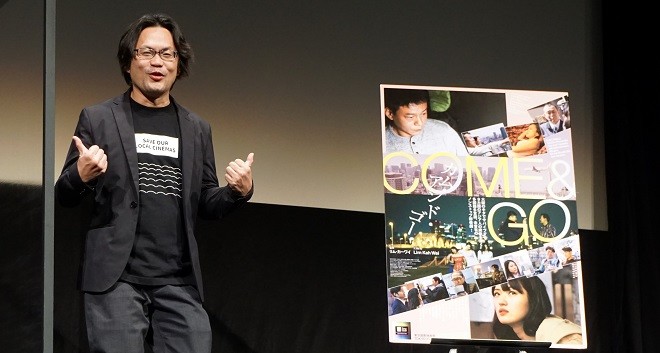 In his latest film “Come and Go,” Malaysian director Lim Kahwai portrays Japan as a sort of transit point for foreigners as they hustle there to chase after their dreams.

“Even though Japanese society needs people from overseas, no one has a sense of belonging here,” said Lim, 47, who has called Japan home for many years.

“Come and Go,” expected to hit theaters in 2021, is set before the novel coronavirus pandemic hit Osaka, a bustling city normally host to swaths of laborers and sightseers from abroad.

The film traces the lives of a Vietnamese technical intern fleeing from a factory, a student from Myanmar, tourists and a middle-aged Japanese couple. The resulting tapestry offers a slice of life of people from various cultures all trying to make it in the big city but, despite all living nearby, do not know each other.

“It looks like they live in parallel universes,” Lim explained. “I want to show they are, in reality, close to each other.”

Lim came to Japan in 1993 and studied at Osaka University. He worked for six years in Tokyo and obtained permanent residence.

Lim became immersed in watching films at art houses here, then started making his own after moving to China.

When he later returned to Osaka, a stranger spoke to him casually, making him feel the Japanese city is somewhat like his hometown of Kuala Lumpur.

“I found Osaka irreplaceable,” he recalled.

Lim spent about six months a year at a guesthouse in Osaka over a period of seven years while filming movies throughout Asia and in the Balkan Peninsula. He called it the lifestyle of a “cinema drifter.”

This is his third title set in Osaka, which was to be his final work featuring the city, but Lim has decided to make one more.

He feels that while countries of origin for those working at ubiquitous convenience stores have changed, Japan has not changed much since he first arrived.

That said, he is now interested in how the pandemic is affecting life here.

“A store I would frequent has closed down,” he said. “I want to see what will happen after the end of the coronavirus outbreak.”